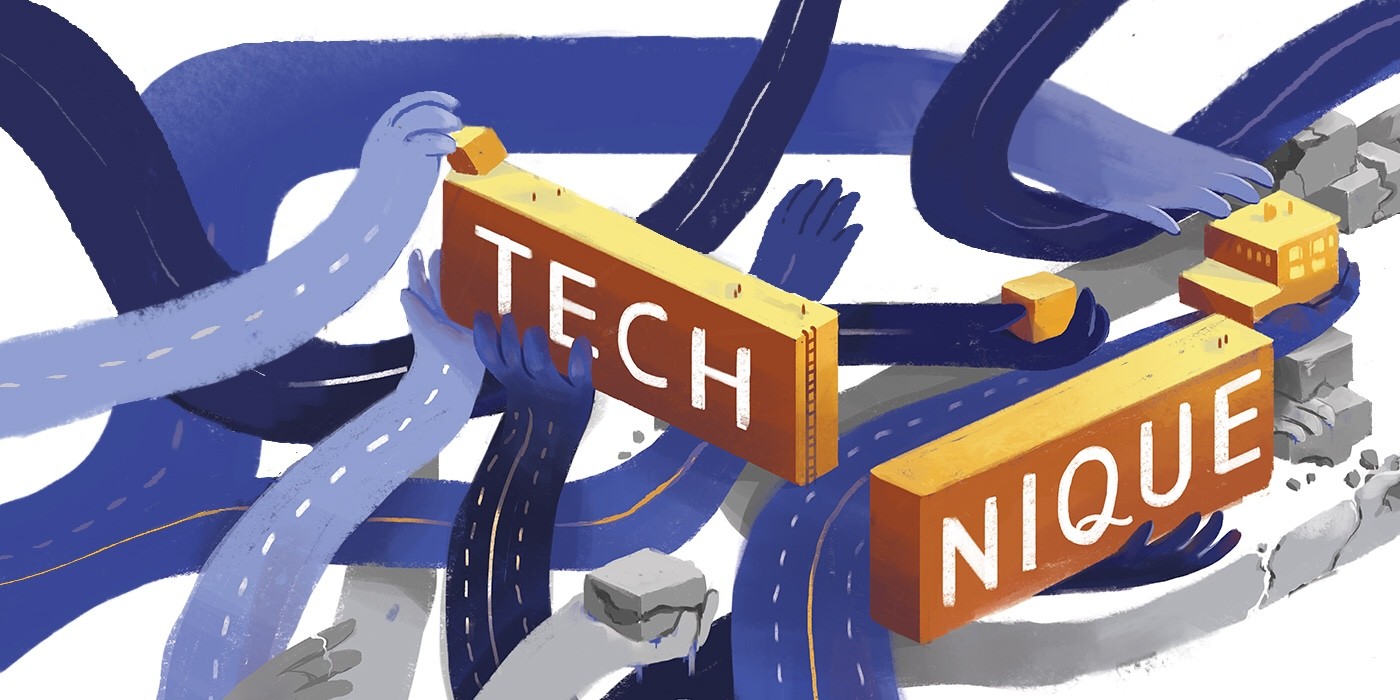 Technique is involved in every activity that human beings undertake. It may be explicit, implicit, conscious, intuitive, theoretical, embodied, learned through instruction and practice, inherited through our genes, or many of the above at once. But from speaking to walking to raising a child to growing crops to building a house to running a business to organizing a social movement to making art to performing surgery to splitting an atom to landing a rover on Mars, to list just a few examples, all our endeavors involve a form of how-to knowledge that guides us toward the accomplishment of our goals.

What are some of our aims? Are they to cooperate and work with nature—both our natural environment and our own human nature? Many Indigenous peoples throughout the world have used hunting and agricultural techniques for millennia. Certain techniques of art-making, such as automatic painting or writing, seek to let the unconscious mind inform the creative process. Similarly, the scientific method involves many forms of technique that, according to one influential view,[1] continually invite nature to prove our hypotheses about it wrong, so that we can form the most accurate picture possible of reality and adapt accordingly.

Of course, in industrialized societies, some forms of technique involve an attempt to control or even dominate nature, such as the techniques involved in producing hydro-electricity here in Quebec, or in cracking deep rock (aka fracking) in order to extract natural gas from the earth. During the Industrial Revolution, technique was focused on the amplification of production and efficiency, giving rise to what British poet William Blake called “those dark Satanic Mills”—i.e. factories—and to cities as we know them today. Since then, technique has also been intimately associated with the development of technology, such as computers, social media and artificial intelligence, and has led to humans living in ever-greater symbiosis with technology, with consequences to us as individuals, a society and a species that are, as yet, not completely understood.

Technique enhances and expands our natural human abilities, increasing our capacity to survive and thrive as well as to exploit and destroy. In the last two hundred years, advances in technique across multiple fields have led to breathtaking breakthroughs while also transforming the way we work and interact with others, not to mention altering the very ecosystem of our planet. In light of this Janus-faced (a force for both good and evil) nature of technique, might it be valuable for us to pause in our thinking about technique? To pause for thinking about technique? To consider its past, present and future? To explore its complexities? To introduce uncertainty into our attitudes and assumptions?

The acquisition of technique almost always requires teachers in the broad sense of the term, from the artisan masters in medieval and Renaissance guilds who guided their apprentices to the teachers in modern classrooms who instruct their students. An exploration of technique, therefore, cannot be separated from an examination of the mission and pedagogical approaches of the institutions, such as Dawson College, that educate our youth. What kinds of technique do our students gain through their studies? Do students discover the creative possibilities that can arise from learning technique—the way that grasping an art form permits them to master or even bend its conventions; the way that understanding the accepted knowledge and skills of a discipline can allow them to interrogate that knowledge and innovate on those skills? Do students emerge from school thinking critically about technique, not only as an instrument or a method but also as the technified 21st century environment in which modern life unfolds?

Most relevant of all, perhaps: toward what aims do graduates apply their technique? How do they use technique to make a difference both in terms of their own lives and as citizens in the world?

In 2019-2020, S.P.A.C.E. invites Dawson students, faculty, staff, alumni and members of the broader community from across the disciplines to pause in their thinking, for further thinking, about TECHNIQUE, and to launch their own explorations around how we do what we do, why and the impact of our actions and choices.

[1] Karl Popper (1902—1994), a prominent philosopher of science, argued that the ultimate test of whether our hypotheses are scientific requires that nature and experiment be able to falsify such proposals.