Review: Curious Incident of the Dog in the Night-Time

When I was in elementary school, I had a friend named Akiva. He lived in Ottawa, and I’d have a blast playing hide-and-seek and other games with him whenever my family would go to visit.  My eight-year-old self never found that there was anything off about him – he was my friend, and that was that. It wasn’t until my parents in passing mentioned his age – eleven – during the trip home from one of our Ottawa visits that I realized something was off.

“What?” I asked, perplexed. I had always assumed he was my age. “He’s eleven? It doesn’t seem like it.”

My parents glanced at each other, unsure of how to proceed. “Well,” my mom began carefully, “Akiva isn’t like you. He has something called autism.”

“Autism?” I asked. It was the first time I’d ever heard the term.

“Yes,” my dad interjected, “it’s a psychological disorder. It makes Akiva act younger than he is.”

“Oh,” I replied. That was a satisfactory explanation for me. I leaned back and drifted off to sleep. As the years went by, my family and Akiva’s family drifted apart as well.

Long after my family had essentially lost contact with Akiva’s, I read a book called The Curious Incident of the Dog in the Night-Time. The novel, written by Mark Haddon, centers on a 15-year-old Brit named Christopher Boone. The twist: Christopher is autistic. He hates being touched, is prone to throwing very physical tantrums, and can solve university-level math problems with relative ease. The novel opens with Christopher studying a somewhat gruesome scene in on his neighbour’s front yard – he has found his neighbour’s dog dead, impaled by a pitchfork. Unaffected by the horrendousness of the situation, he analyzes the situation as if it were a math problem that needs solving. Christopher then decides that he must get to the bottom of this mystery, and resolves to uncover the dog’s murderer himself. This quest leads into another, more personal one for Christopher: a quest to find his mother, who had left him and his father when he was very young. 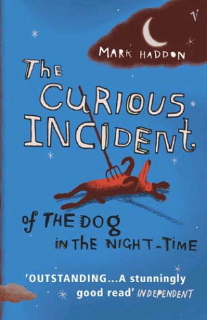 The reader often forgets that Christopher is 15 years old. This is because autism is a neural developmental disorder where social interaction is impaired. The causes of this disorder are complex and not completely understood, but scientists have been able to conclude that the autistic brain starts to develop too quickly about 12 months after birth. The symptoms begin to show even in infancy. For example, a child with autism may not begin to babble at age 1 as babies do in order to turn their newly discovered oral ability into language. When it comes time for an autistic child to dive into the social world on the school playground, his or her impaired social skills will make the task of making friends significantly more difficult than it is for other children. But the autistic child’s lack of social dexterity is never a stress for him or her, since one of the key characteristics of autism is social avoidance behaviour – meaning that a deficiency of friendship in his or her life would never trouble him or her. An autistic person will have difficulty recognizing and understanding human emotions, in others and in themselves, and therefore will not feel the need to make emotional connections with others.

But perhaps the most interesting aspect of autism is its effect on sensory perception. A person with autism may experience the world in a completely different manner than you and I. Depending on the case, autism may increase the sensitivity of some or all of the five senses so that they become, essentially, hypersensitive. Alternatively, it may decrease the sensitivity of other senses, so that they become hyposensitive.  In The Curious Incident of the Dog in the Night-Time, Christopher puts his head on the ground and covers his ears when a couple of police officers begin to raise their voices at him. This is a common circumstance for autistic children, since he or she may have extra sensitive hearing. Therefore, the volume of the world is amplified, and this can be unpleasant. Similarly, an autistic child may squirm when he or she is touched. Even a small physical display of compassion can prove to be disagreeable, since a simple touch is felt with much more intensity.

As one reads about the ambitious undertakings of Christopher in Haddon’s novel, one becomes engrossed in the teenage boy and the fascinatingly quirky way he perceives the world. Christopher is an enigma to the reader, a puzzle that needs to be quietly solved. Because, really, what do we actually know about the inner workings of the autistic mind? Haddon does an excellent job of giving us a glimpse into its fundamental machinery, but we realize, once we have been fully immersed in Christopher’s world, that we will never understand the autistic mind completely. But at this point, we have already developed a deep compassion for Christopher, and we find ourselves cheering for him until the end. My times with both Christopher and Akiva may have been short, but they were enthralling and, as clichéd as it may sound, inspirational. After spending enough time with both boys, I could barely even remember what qualities were supposed to have separated us. I became used to their way of thinking, and, just like a language, I learned it.

Jessica Prupas is in her first year in the Literature program at Dawson College. She wants to be a full-time writer and will continue to pursue this goal in university. She is interested in literature, movies, and art.

Credits for the illustration goes to the book cover of "The Curious Incident of the Dog in the Night-Time" by Mark Haddon (2003).