What We Can Reap from Rap

This is a diss track to all those who diss tracks for distracting us from the real issue––that we’re just trapped and stuck in closed off districts.

Verse 1: If, by some fortune, you’d sit in the presence of someone who’d lived their life entirely imbued with passion and drive, attuned in perfecting the craft of rhythmic music (rhythm is what he loved, this astute kid: already from the age of three, he knew it and would wake up at a-quarter-to-six to study harmonics and experiment with acoustics), would you consider him foolish? Would you think it’s a stupid waste, that science could better use his mind and all that he can contribute is nothing more than putrid? No, I believe it’s conclusive, that in a virtuoso, virtues live. You would find it hard to prove or pass a judgment that is abusive. Your rationale would be able to compute it, and his acceptance in society would be fluid. If, by a fluke, you were the culprit of a second “exposed glimpse,” you’d see one who devoted every waking moment creating liaisons between ideas from the pulpit and loaded prose scripts composed of encoded meanings that the pros hid, until his brain is bloated, and he calls himself a poet. Some days his pen free-flows with stories of others’ heroics, with anecdotes in a dosage that is both graspable and potent; other days, he shows that he can omit his onus and write in villanelle and sonnet. There are times, he garners extra focus and thinks of a line and doesn’t know where to post it, so he holds it until he finds a post-it. And even though he’s busted and there’s no incoming of money pouring in, his ego stays in check until a post-date. Faced with this story, would you remain stoic or would you quote it? Would you be a proponent of the opponents up on podiums siding against his cause that he’s battling, or back bone him, condone him and extol him, inciting to fantasize a reality. In our society, pursuing both rhythm and poetry are noble offers: Robert Frost and Bono have been guests at the Oval Office.

In comparison, rap’s embarrassing. It’s very simple, it has no merits then like a good Samaritan American in a Sumerian garrison. It mirrors then a bear’s den smeared in kerosene; saying it got dirty. The fart arm of art forms thought of as a farce for the smart forums with Garth’s forearms saying it’s not worthy. But hold on a minute! Rhythm and poetry: if both mediums were mixed I could rename them for what?!? Wait… Rhythm And Poetry is the acronym then for RAP. 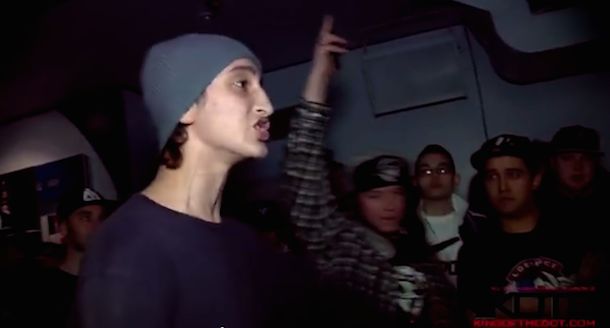 Verse 2: If, by some luck, you were able to be exposed to rap and you removed the negatives, you would get a better picture and disprove the prejudice. The lyrics of rap are often accused of being explicit, dated and aggressive and not seen as sophisticated, impressive. Those who just visit, hate it, reject it and imply that to our forward-thinking planet, it elicits a state that’s regressive. You see, rap is a skill set equivalent to studying the violin or paint, except the mastery’s lane-switch is language. The expression of emotional anguish vanquishes as does the violence or pain remain squished pertained to the perhaps tainted panes framed and displayed within the bubble of rap. It is a linguistic form allowing for rumble and smack without a physical body being pummeled and whacked. Instead of lives being under attack, all the machismo is funneled into rap, and the only fists ever thrown are humbled in daps and coupled with claps. On its base level the art form isn’t static. It’s electric, and the rap circuit’s always buzzing, emphatic, with the current next switch. Each time a fresh blueprint gets shipped, it seeps in, and the renewed apprenticeship begins. Innovation, imitation and enough patience alongside groomed friendship lead-ins. Staying upbeat, and spit on beat, compete-and-beat on repeat to prove penmanship, he wins. Many of those considered great in this relatively young art, spent over a decade, while actively on guard of climbing up the ranks until they got out of the “junkyard”,  prior to their career’s praised official  jump-start. How can the public lens zoom in, focus and snap at rap’s banning? When an icon, Allen Ginsberg, could act on writing ”Howl” and has been accepted into the poetic cannon. John Ashbery and e e cummings were known for at times being out front and blunt, and even Shakespeare had an affinity for the word… I’m sorry I can’t. Throughout all literature, we’ve seen quite graphic facets. Aristophanes, Catullus and Ben Johnson are known for their classless classics. It is easy to denigrate variant forms, newer expressions of socio-economic despair at its core. Maybe you’ve forgotten rap’s roots in jazz and blues. Concrete and imagist poetry broke boundaries, too, to name just a few. And how can someone break down an entire culture like a parasite? That’s the equivalent of trashing the Louvre. To not give an art of speech a say is unfair and benefits nobody. It’s unjust, a lose.

Chorus: Why does rap have such a bad rap?

Why do scraps end up on their scraps?

With what service would you scrap it and claim that it’s crap?

There is no discrepancy just give it a good scrub and see,

Why disrupt have such a bad trip?

Why describe pent up anger scripts?

With a surface would you scrape it and claim that it’s scrubs?

There is no disc recipe just give it a good scribe MC,

From lose, draw jack victories to the point that Dragic’s scoring.

Verse 3: If you have the distinction to see past rap’s past that is presently wrapped and presented through the resentment of a past president’s precedence, and, by some oddity, grasp that the passed pessimism passed passes and presses on rappers’ backs with the pressure of a piston, you might still fall victim of this rant’s position. You may still be stumped by the branches of egotistic barking that subtract from Rand’s ambition and leave believing that the issue at hand is rap. That’s your rendition. By telling this story, it relieves some of your worry and frankly that hollow cost of not seeing the core is less gory. If you direly need comforting, you’re stuck as addicts to your seeing the world in a light that makes us the sorry victims of rap then ignore me.  Unfortunately, this is caused by a failure of further imploring, exploring and informing. You see it is true that some rap may allude to homophobia, violence, excessive spending, surreal hits of drugs and fodder hint-words of heartrending misogyny, but to understand it, we have to look deeper. The world we live in is home to phobia, vile and sex. The abyss is expanding, so we all get dragged further in toward the hurt-trending. the message in it is: It’s over-indulge then over-take into over-spend untill we’re all ID-less, but I digress and those heavy thoughts are brought to light in rap ideas. Our society doesn’t reflect what rap is; rap reflects what our society is. Rap’s innuendos act as a new window into when doses of undue wind blows in our culture. Sex and violence sell music, books, movies, clothes, video games and someone is willing to do anything when you win dough. The shift toward sex-centricity, a change we’ve shown, dominates the entire mainstream flow. From Lady Gaga down to 14-year-old baby mamas. Slips our mind just how mainstream rap is. If you furrow your brows claiming that rap is low-brow, the fact is, you shouldn’t browse through Nike, Sprite, Beats, computers or even insurance ads, because you’d raise a brow at how often companies use rap to hold audiences captive.

Verse 4: Finally, if you are unfortunate to be stuck on rap’s rougher past, you should note this. In recent years, many rappers have gotten over throwing controversial jabs to get noticed. Rappers, such as Macklemore and Lupe Fiasco, have used their social power to mold kids. They address controversies, like tolerance and anti-gang culture, which are issues that had gone unnoticed. Remember that rap is still a young art and it has yet to become an adult. Plus due to globalization, rap is rapidly spreading, if you didn’t get the notice. For Stromae and Dag Nachash, language, culture and social issues from their own camps do not get eroded. With new styles, new rhythms, new lyrics and beats, the whole rap scene has exploded. You see rap in its essence was a platform that flat for them when it lost its motive. Rap was a man with a tin--just homeless. But that tin-man found a beat and home is where the heart is the art’s heart was misled home now it’s home honed in mislled. So rap can now grow and innovate; all is not hopeless. Its potential can be redeeming; take us further then an opus. But if rap continues to be based on dissing peers then hoe kiss, Po cuss. Rappers can and will return to their true blossoming state as both rhythmic musicians and poets society, wits- a sigh of relief- what’s decided is: wood stock… “sign the deed” with a side muddy watch the seismic spree.

Dvir Cahana (RiviЯ) is currently studying Pure and Applied sciences at Dawson, and when you meet him you'll almost always find him smiling. He is a practicing Jew, and follows Ashkenazic customs.  Dvir spends his free time training and improving his basketball skills like a boss and explores his creative passions through the often-frowned-upon art of rap. This misconception is described in the above rant, so proceed with caution.