What If? Theme Poster

During the Winter 2022 semester, in a co-curricular collaboration between SPACE and a 2nd year Illustration class taught by Marc-André Cright, students were presented with and discussed various aspects of the upcoming SPACE theme: What If ? Under the guidance of Marc- André the students developed proposals for the poster that would serve as the public visual representation of the 2022/2023 theme.

The proposals were reviewed by the SPACE team, and from 33 submissions 5 were chosen to present to the judging committee consiting of Illustration teachers Marc-André Cright and Mark Sy, SPACE Advisor Lois Valiant, and the SPACE coordinators and fellows . The presentations which took place over Zoom included both the students’ poster and their statement about the connection between their work and the What If? theme.

As we are every year, the committee was impressed by the thought, attention to detail, skill and professionalism that each student displayed in their proposals.

Directly below is the winning poster designed by Alexia Boreham, followed by posters by three of the finalists: Arusha Bruns, Eric LeClerc, and Mirella Bacco. 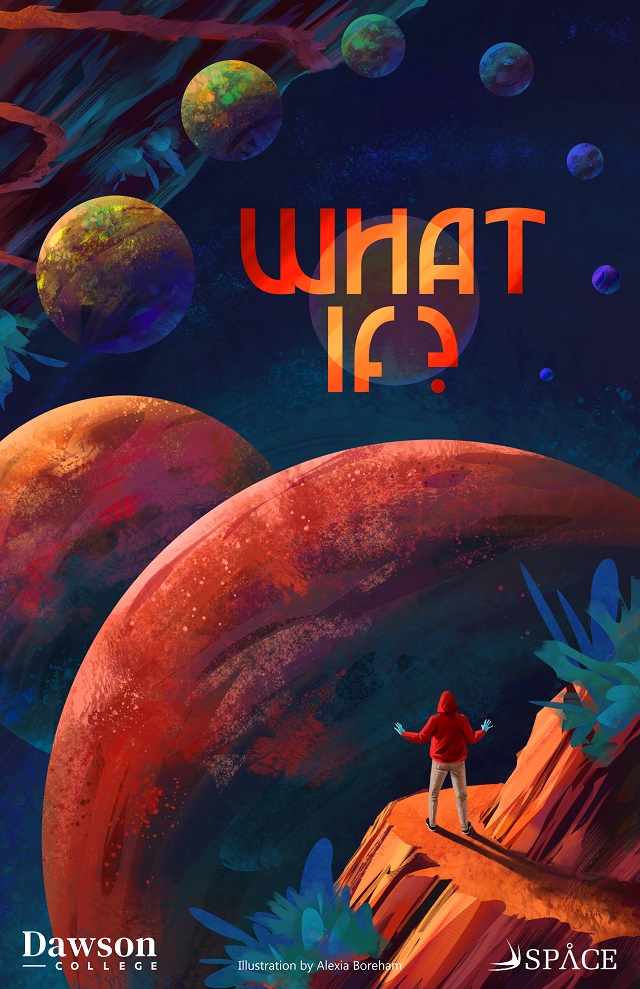 My concept started off with the question “what if we could transcend reality?” which led me to the aspect of bilocation (related to quantum physics). This is when something appears to be in two places at once. When looking further into it, this reminded me of something being moved so fast that its molecules look like they are separating themselves, ultimately creating several duplicates of the original object (think of waving your hand so fast that you see multiple silhouettes of it at once). From this, I had the image in my head of multiple circles or molecules being repeated. I then translated this to circular planets and how there are still a lot of things left undiscovered about outer space, just like how bilocation still remains a mystery to scientists. So, my illustration essentially represents how there are simple explanations for things that happen in life, yet we still can’t comprehend them completely. Hence the person that I drew in this illustration who is left a bit stunned and confused at what they are seeing in front of them. 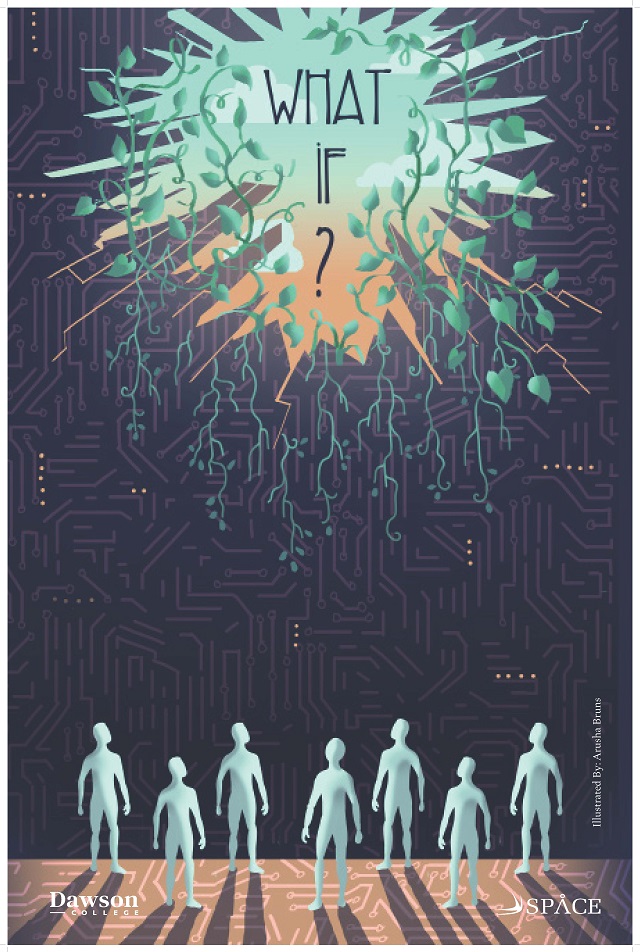 In my poster the theme "What If" represents the question of reality, what if there was a reality beyond the one that we are currently fixated on, one that already exists but that we have neglected and forgotten? What if this reality broke us away from the digital world and brought us back to an existence where nature thrives? In my poster design, the world cracking open is a symbol of awakening, the interweaving of the vines with the computer board represents their interconnection and how patterns repeat themselves within the digital and natural world. Our technological advancements are derived from the natural world and thus still echo its presence. However, we have removed ourselves so far from the roots of our discoveries that we forget to respect and redirect our attention to the teachings of nature. 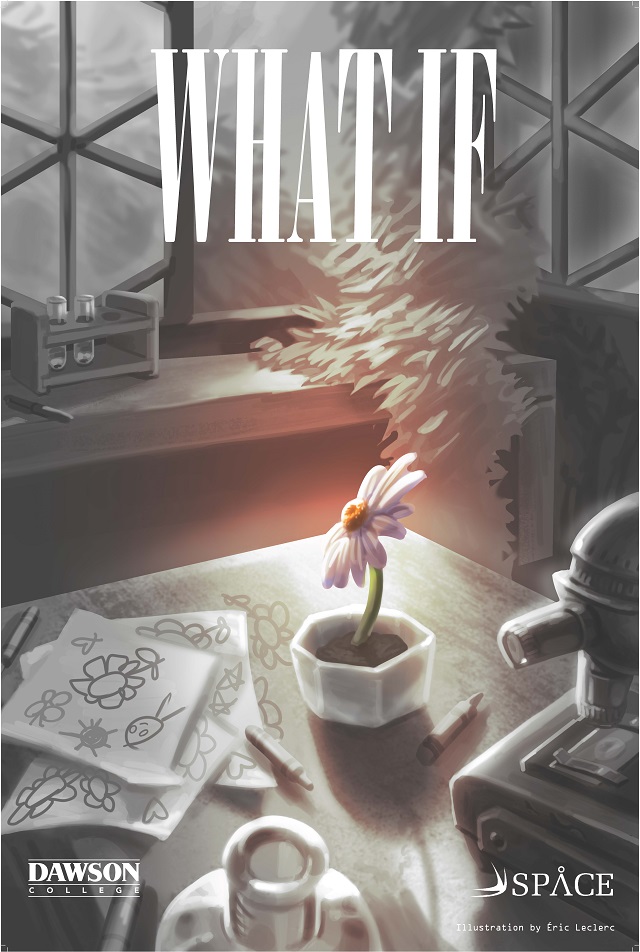 When hearing the theme ''What If'' I immediately though of children's imagination and their infinite potential. I wanted to create an illustration that could reflect this in various ways. I incorporated many ideas here to create a storyline withing the poster. From imagination to reality, as seen with the children's drawings of flowers, and the actual flower next to them. The potential for growth, as seen with the singular flower flourishing, bringing light and color with it. Experimenting and the possibilities of creation and discovery, as seen with the lab equipment, and the implied study of flowers and creation of an artificial flower in the image of the child's imagination. It all starts with an idea. I wanted to reflect any and all ideas one can come about, from silly play-pretend imagination to more serious problem solving. Here, I wanted that creative potential to outshine its surroundings, hence why I made limited use of colors only around the budding flower, that is illuminating both the drawings and lab equipment, both being aspects of ideas mentionned previously. Overall, this piece is a reminder to make use of your inner child as much as your logical mind, to see any and all possibilities. Be creative when answering your own ''What If's'' !

Éric Leclerc is a second year illustration student. Here is a link to his online portfolio: https://eleclerc.artstation.com 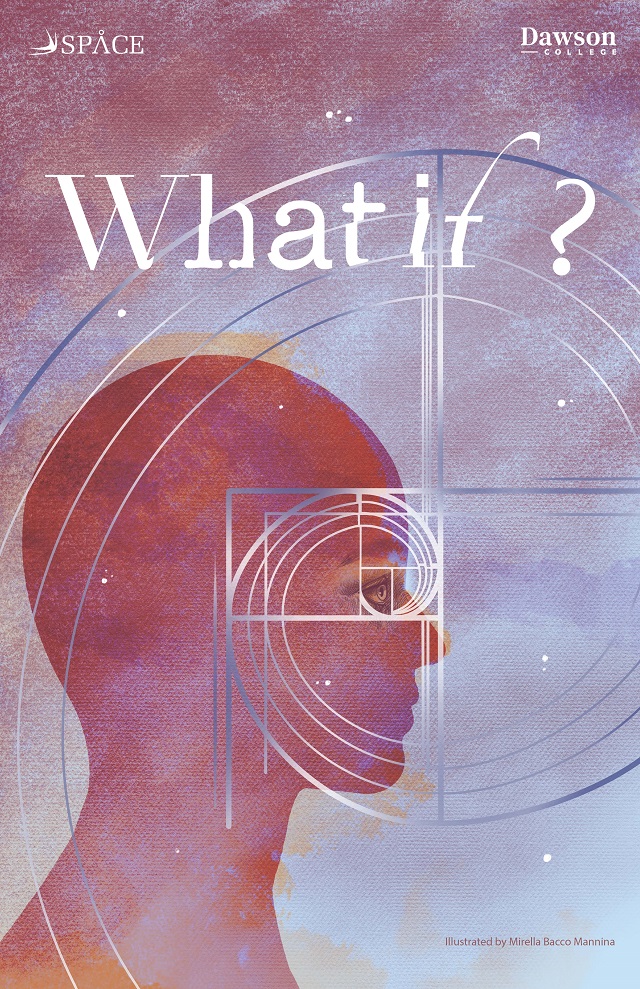 Humans can create countless things both for good and evil. Our capacity to think, question, create and envision are some of the things that made our evolution possible. With keywords like "art", "science", "creativity" and "possibilities" in mind, I make use of textures and symbols to illustrate how one thing can become another and open several doors to new paths.
Art is represented by the colorful charcoal and watercolor textures, as well as the line art of the eye. Science is the golden ratio, where math always proves the world's perfect balance. It also puts in focus the "window to our soul" and at the same time the tool we use to translate what we think to what we see (and vice-versa). The background contains hints of clouds that refer to minds "in the clouds", or contemplating, dreaming. One of the clouds is purposefully placed in front of the eye to show direction forward, to the future. Lastly, the words "What If?" are written in different typefaces to represent all the different possibilities the theme invites us to ponder over.

If you’d like to check more of my work, you can find me on Instagram at www.instagram.com/mibacco . 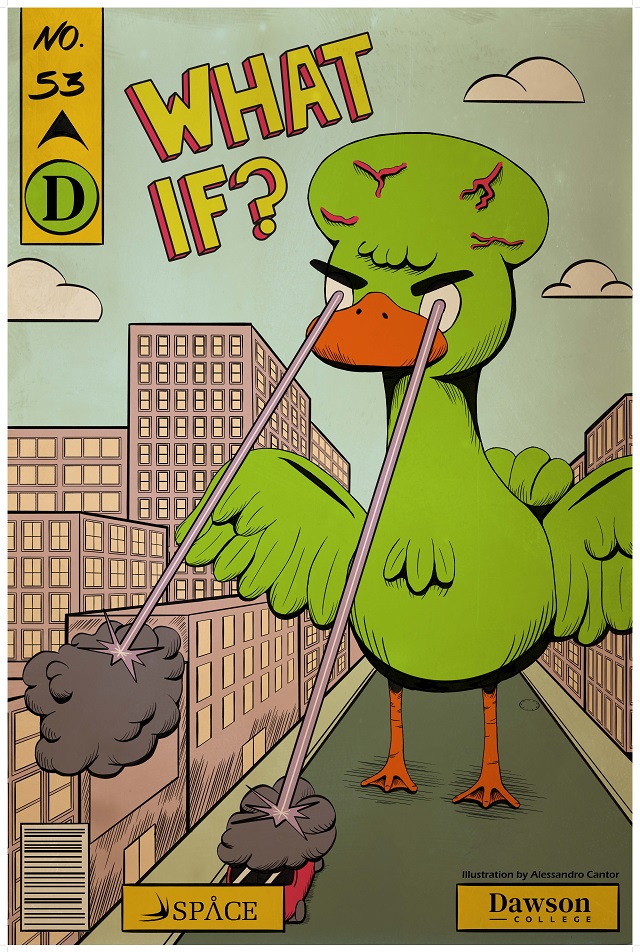 For me, the prompt led to the absurdity that imaginative scenarios can have. The spiral into fiction often leads to silly ideas. I showed this in my design by having an innocent goose be the monster that everyone fears. This showed absurdity and I paired it with a comic book still to emphasize the ridiculous nature of the piece. The silver age of comics was a special time in comic history. It was the period were authors where creating the most outrageous and ridiculous scenarios to grasp the reader's attention, similar to what I did. 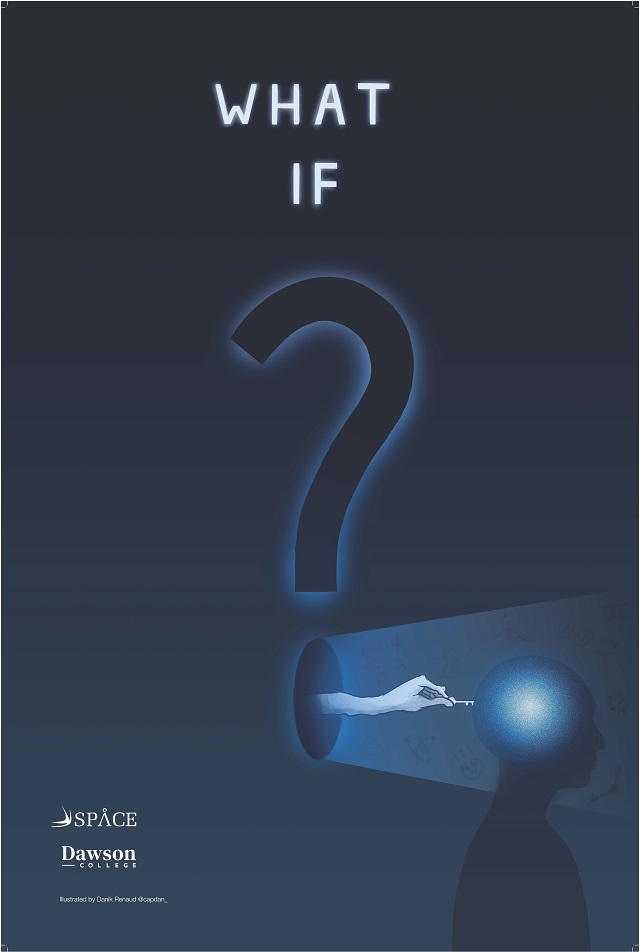 I approached the theme of "What If" through the question, what if extraterrestrial life exists and how that could unlock our minds and redefine what we deemed as impossible.  I approached this in my design by having a hand coming out of the question mark, unlocking the mind of a human. 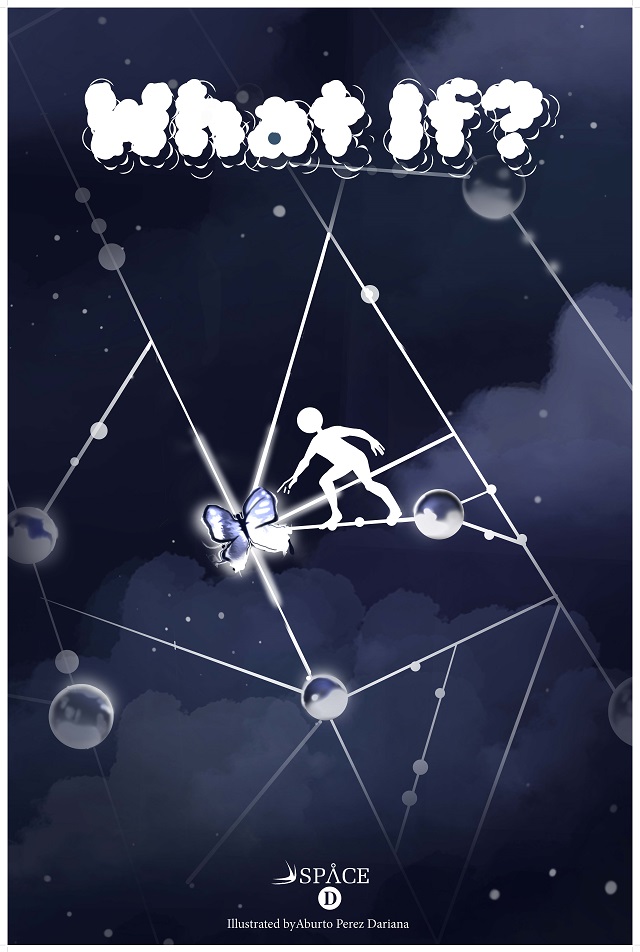 A simple question can lead to multiple possibilities that are difficult to answer. The question “What if?” is imagining multiple realities and figuring out their possibilities. For me it signifies time travel and the smallest changes can lead to big consequences (aka the butterfly effect). In our reality/universe we face it, we deal with it. In one universe it could have the worst consequences and in another it could be resolved and have the best outcome. What if? is what could have happened? What results await if I could change this small thing that happened? Overthinking our actions. Everything happens for a reason. 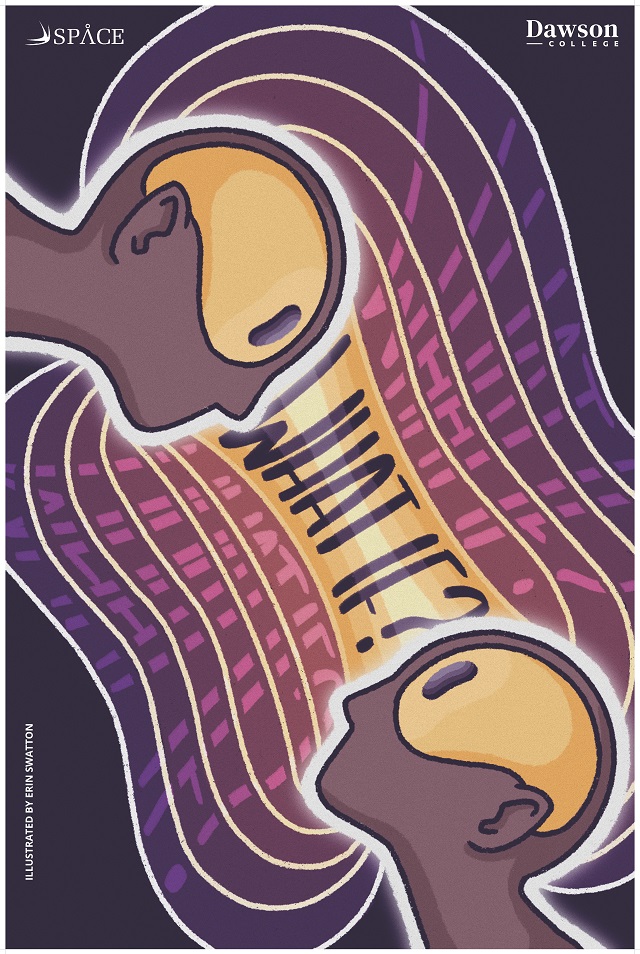 What if we could read minds?

Imagine if the human race had always been able to read minds. Would verbal communication be relevant? Would personal space and privacy exist? Would we have access to an endless bank of knowledge? These are all questions that stemmed from my initial inquiry and inspired the development of this illustration.

My poster features two mouthless figures asking themselves this said question through a beam of telepathy, which resonates in ripples of thought and reflection, ultimately dissipating into space. 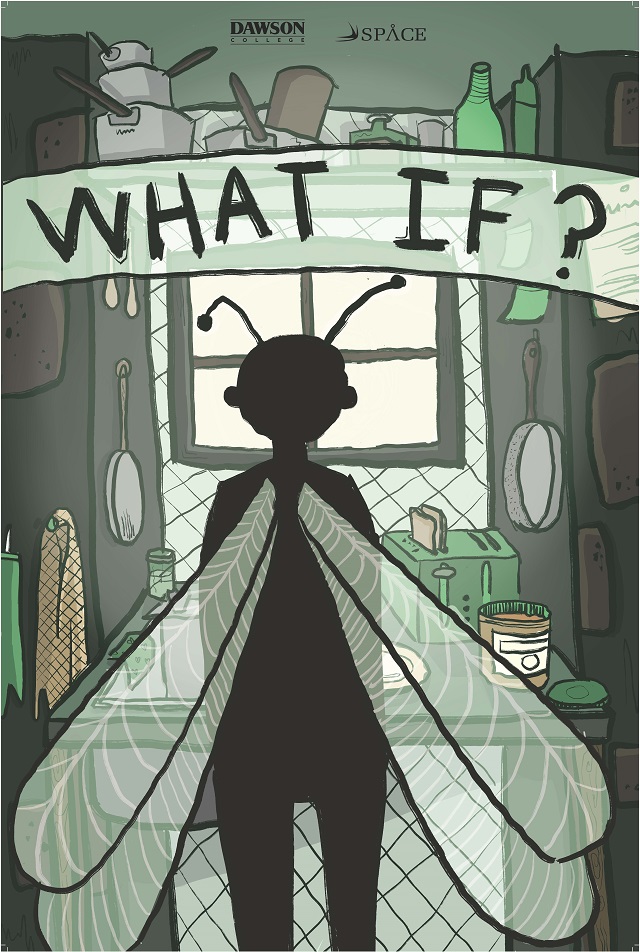 With this illustration, I wanted to represent an abnormal “normal”, meaning that something could be normal in our reality, but completely absurd in another. It forces us to examine what we consider normal, expanding our understanding of the world as we know it. This illustration is the new normal looking through its own window, as we look at it through our own windows. 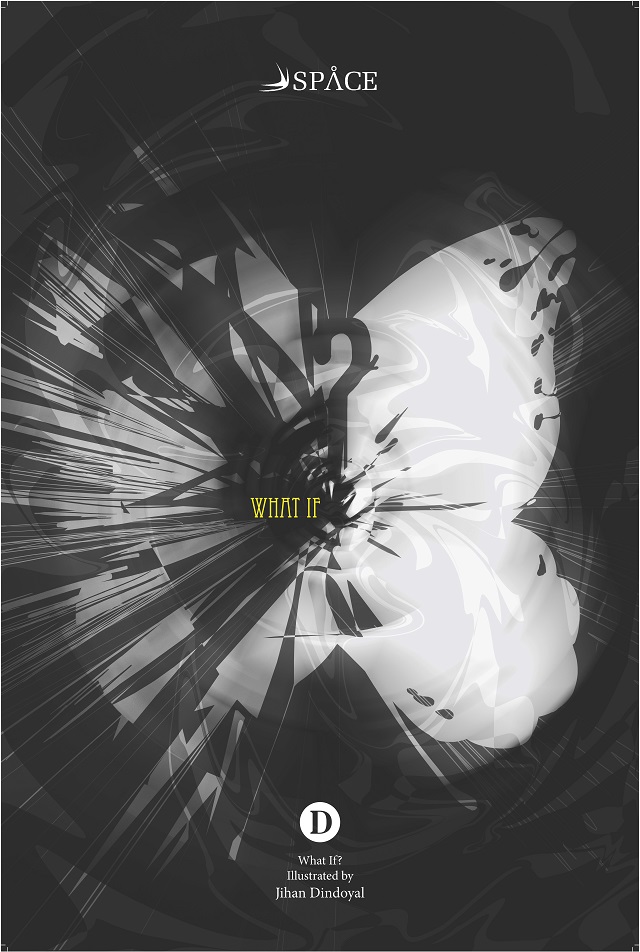 To me, a “what if” statement could refer to either a hypothetical scenario that appeals to the viewer or a statement putting forth multiple good answers confronting each other. Although, this statement alone tends to conceptual thinking rather than the second option, tending towards more argumentative/rebuttal phases. For this project, I have chosen the conceptual path as it is more appeal to storytelling. 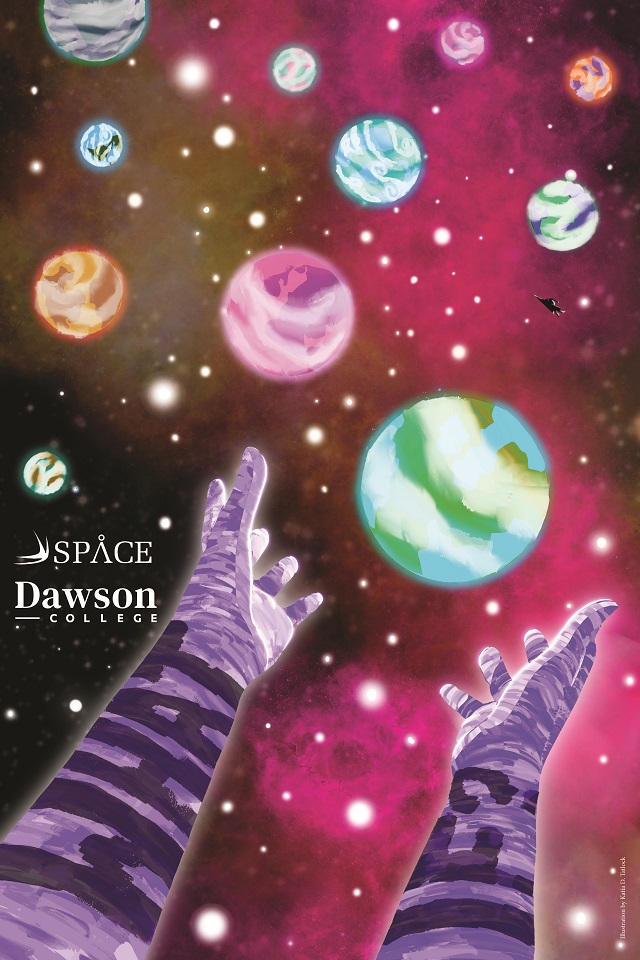 When we initially were presented the theme, "What if?", the first thing that I thought of was possibilities. After a few readings on the physics and the science of possibilities, I chose to illustrate the concept of parallel universes and the multitude of possible worlds we could have lived in. Let me tell you, this was not easy. After melting my brain with quantum physics, I decided to draw different versions of planets that could have been ours. I also wanted to illustrate the power of choice, which I incorporated with the two arms reaching for the closest planet. Approaching the end of this project, I decided to incorporate one of the possibilities that has fascinated humankind for centuries: the possibility of alien life. I added a little spaceship heading directly to Earth to fit with the galactic background. 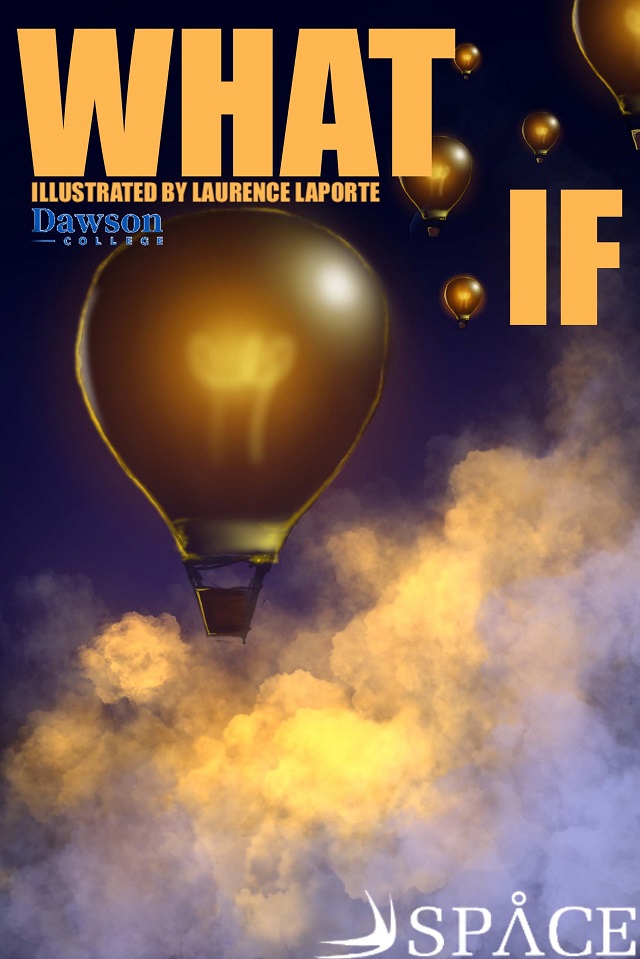 “What if” made me think of the great engineers of history. I was fascinated by the idea of a single “What If” redefining worldwide culture's definition of their surroundings. I thought about how before Thomas Edison created the lightbulb 'light' would have meant a flame or the sun to most people. I was inspired by how humanity manages to turn any 'What If' into a reality through the advancements of science and technology. The visual concept of the poster is inspired by this idea of major landmarks of our environment being modified by technological advancements. What if the stars stopped shining? What would we create to replace them? How would that look like? 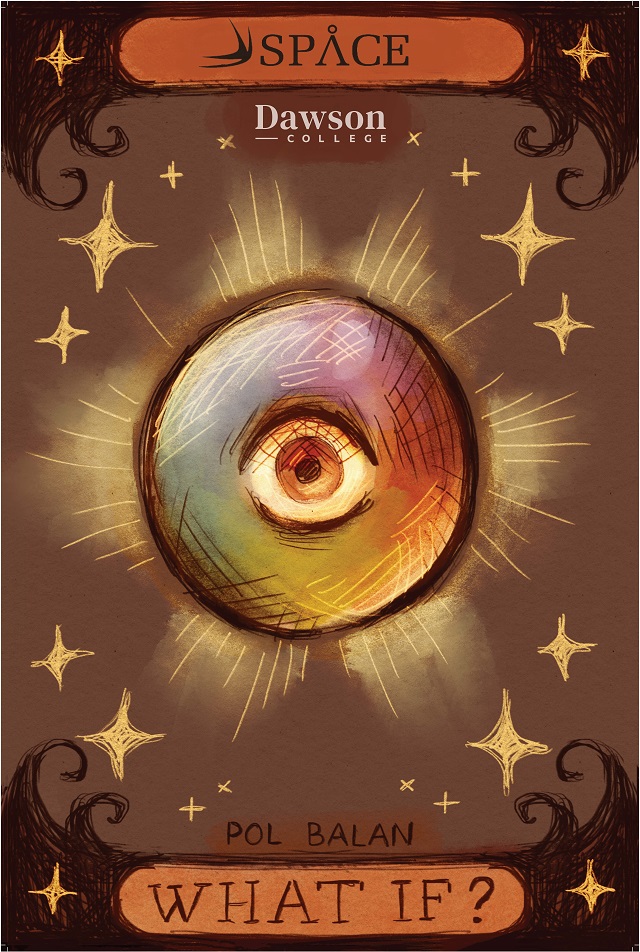 To me, the question of "What If?" represents the endless possibilities of the future. No one knows what will happen, however there are people who try to do so, such as fortunetellers. I have chosen to pick out the most recognizable symbols of fortunetellers, thus I have illustrated a crystal ball with an all-seeing eye in it while making the layout of the image resemble that of a tarot card. The rainbow coloration of the crystal ball also subtly represents the aspect of "What If?" and a multitude of possibilities as opposed to having just one colour tied to the image. 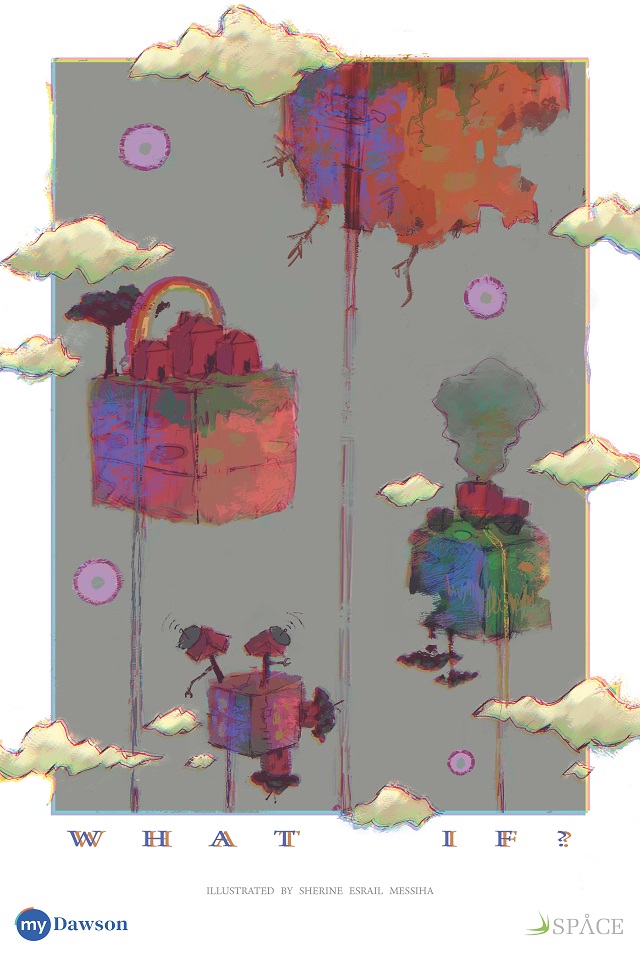 What if there were alternate realities?

I've always been inspired by the concept of the existence of parallel universes where things are similar in different ways. So, I wanted to portray that in my project using tiny houses and the environment around them as if each house was in an alternate reality. 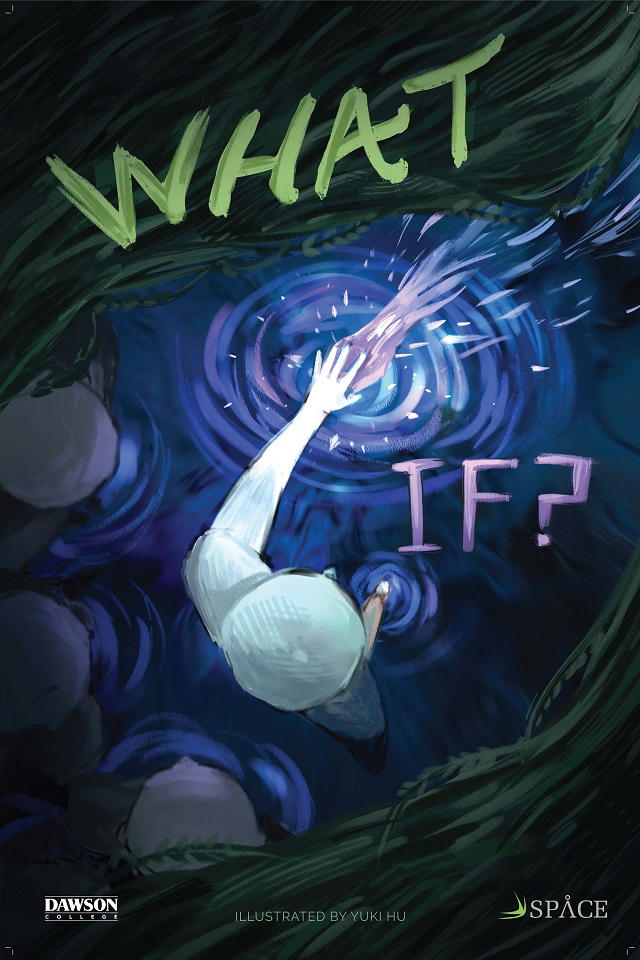 When I heard of "what If", I thought about decision making. This idea pushed me thinking further: As long as we live in a society and community, we are always influenced by our surroundings. The different decisions that we make might not be from our own consciousness. When we are with our friends, we are pushed to do certain actions that we wouldn't do on our own. We are also forced to act a certain way because of certain social constraints, where it is considered "normal" if we act that way. Then, I thought of what if we are able to act on our own without any influences? From a top view, I illustrated a character stepping out, separating from the group of people behind them, symbolizing the freedom of decision. The magical water effect on the floor represents the new possibilities that come with that decision. I chose to approach this poster with an impressionist art style with visible brush strokes and very strong color contrast to emphasize the magical effect and the person stepping out from the group behind them.