Wanaawna from the series Water Portraits

The Momenta Biennial in Montreal consists of fifteen exhibitions, including fifty-one artists from twenty-four different countries. This year’s theme is “Sensing Nature”. All the artworks in the exhibitions explore the idea of our perspective of nature and potentially its perspective of us. One of the artworks featured is entitled Wanaawna at the Galerie de l’UQAM. 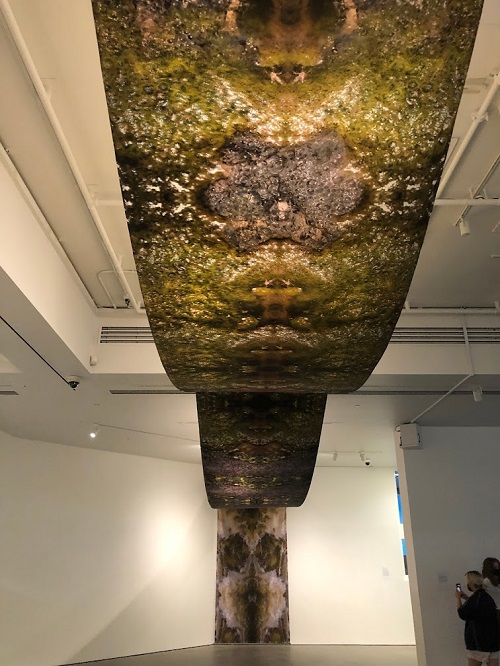 This work by Carolina Caycedo is a part of the series Water Portraits that the artist made in 2019. The artwork is a photograph printed on a cotton canvas that is 15 meters long and 1.6 meters wide. The loose canvas is mostly draped across the ceiling, however, at one end it runs down the side of a wall to the floor. Images of waterfalls and rivers are spliced and blurred together in a symmetrical pattern down the length of the canvas. The outcome is images of water that look like they are being shown through a kaleidoscope. The symmetry of the composition gives the very organic shapes more structure. The symmetric repetition makes the very abstract and organic images easier to process while still lacking any form of representative image. They are therefore more recognizable as water and plant matter while still being very inconsistent. The most prominent color is green, but several sections of the canvas also include shades of brown, white, yellow, and purple. The use of many natural colors such as greens and browns but no blues expands the idea of water. By avoiding blue, the images correlate with small streams and lakes, not large bodies of water such as oceans. Also using many different colors along with green makes the water seem very diverse and varying, connecting it to small streams and lakes even more. The artwork mimics a stream flowing into a waterfall through the presentation of the canvas. The loose draping of the canvas on the ceiling is like the flow of a stream and the section of cloth running down the side of the wall looks like a waterfall flowing down the side of a cliff.  The varying colors and the bubbly texture of the water also imply that the water carries a lot of oxygen and plant matter.

By portraying even these small bodies of water as chaotic and diverse, the artist makes water seem very powerful and important. Caycedo reminds the viewer of the irreplaceable resource that is often taken for granted through emphasizing the value and importance of water. The artist is based in Los Angeles, which has been plagued by drought for several years along with the rest of California. By looking at the artwork through the lens of drought and over-consumption of water, we can see that the work is taking the original idea and importance of water and inverting it. It proposes that we value water as a powerful resource full of life and nutrients, instead of an overused burden that humans must preserve for their own sake.

Photograph by author: Wanaawna installation from the series Water Portraits .

Raina Proulx is studying in the Visual Arts program at Dawson. She has been studying and creating art for the past seven years.