Trees have long been symbols of life, longevity, and health. With the ongoing pandemic, physical and mental health have been a pressing concern, especially with regards to teens and young adults. With the restrictions imposed on all aspects of life, including travel bans, curfews, lockdowns and social gathering limitations, young people are isolated both physically and socially. As a remedy, a group of three Dawson students, Hristo Sandev, Xiaowei Yu and Shawn Maor, are developing a social networking application called TreeHugger as part of the S.P.A.C.E: Make Things That Matter complementary course.

This application will allow users to engage in social networking by anonymously viewing and posting virtual messages on trees when within a certain radius of their location. In essence, every 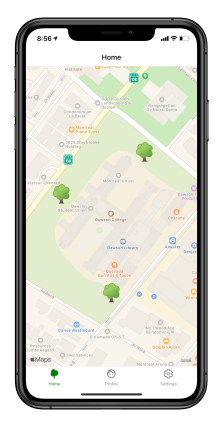 tree acts as its own discussion forum where anyone may share their daily struggles, leave a kind word to a stranger or seek positive attention. The application aims to reduce the toll that isolation is having on mental health by reconnecting people with their community. A checkbox lets users decide whether they want to post their message anonymously. This optional anonymity provides users a safe space for self-expression without judgment. To prevent scenarios where anonymity is abused and leads to hate speech, bullying, vulgar language or illegal activity, an AI monitoring system is being implemented using natural language processing to filter malicious messages and avoid harm to others.

The application will also utilize physical activity as a tool to improve mental health. Research in the UK has shown that physical activity can reduce levels of stress and anxiety, as well as serve as an alternative treatment to depression. In fact, even a brief 10-minute bout of brisk walking can result in an improved mood state and increased mental alertness (Mental Health Foundation). By requiring users to be in proximity of a tree in order to communicate, TreeHugger encourages people to go outside for some fresh air, even if only momentarily.

Although the main purpose of the application is to improve mental health among teens and young adults, its secondary goal is to encourage eco-friendly initiatives. The project aims to raise awareness on the importance of trees and encourage people to plant as many as they can. In fact, several features currently in development relate to sustainability. One such feature would potentially allow users to claim ownership of trees they have planted. This would unlock certain achievements for the user and allow them to customize the way their tree looks on the map. This customization would be visible to all users, thereby encouraging even more people to plant their own tree.

A prototype has already been developed and showcased during Dawson’s week-long ScienceFest event. The complete application should be made available for download on both the Apple Store and Play Store in the coming months.

Pleae note: the image above is of the current prototype. It does not necessarily reflect the final look of the application.