The Lake is a Cup

This year’s Momenta Biennial showcased the works of fifty-one artists from twenty-four different countries, all of which were related to the theme of “Sensing Nature”. This piece was presented at the VOX Contemporary Image Center. It more specifically depicts an Indigenous perspective on nature, one that focuses on the effects of pollution on Native American environments. 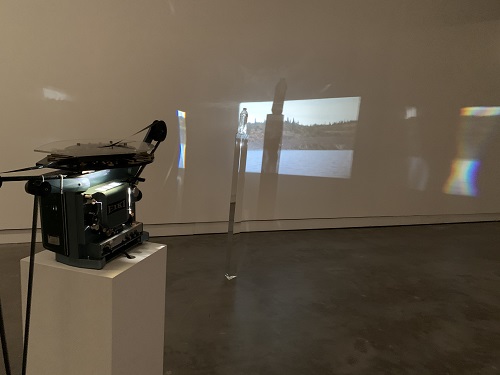 This is a work entitled The Lake is a Cup created by Tsema Igharas and Erin Siddall in 2021. This artwork is composed of a video as well as some 3D elements that are placed in front of the wall on which the film is projected. In the video, we can mainly see the Great Bear Lake from different angles. Sometimes, we see a close-up of the rocks in the water and other times we see the lake and its surrounding trees. We notice that the colours are faded in some of the shots. This can be explained by the fact that it was filmed with an old camera. Arguably, the faded colours represent the negative effects that mining had on the territory. As a matter of fact, the artists have chosen to depict the “memory of water” in their work, and showcase the damaging impacts of the radioactive waste that was left on the site after the closing of the mine in 1982. There are also some vivid red colours in one shot that could possibly represent the blood and anger of the Indigenous Peoples that were most harmed by the activities of this mine.

When it comes to the 3D elements of this work, the one that stands out the most is the 1960s projector. The film's pellicule was developed and projected on the wall using a 16mm “Eiki” projector. This projector adds a noise element to the work since it is very loud. Its noise can be qualified as intrusive. The artists incorporated this element to convey the feeling of being entrapped, and mimic the physical pain and discomfort that Indigenous Peoples were subjected to because of the radiation of the mine. Furthermore, right in front of the wall, is a water bottle atop a glass prism, which the film is projected through. The artists filled the bottle with water from the Great Bear Lake, and put it on the glass prism that refracts the light from the projector. The image is then projected in two different ways on the wall: one that is refracted and distorted, and another that is not. The first image is arguably a depiction of the state of nature after radiation, in other words, disfigured and unrecognizable. But through the prism, we also see the bending of the light, revealing a multitude of colours. Since the artwork represents the memory of the water, we can argue that these colours symbolize nature’s stubbornness and strength despite all the harm humans have done to it. The rainbow is usually representative of hope and new beginnings, which is what the artists are arguably trying to convey through their representation of the Great Bear Lake.

In terms of composition, this artwork is asymmetrical to depict on one hand the damaging effects of radiation, but also, on the other hand, a certain hopefulness and promise that nature will find a way to heal. Finally, it is naturalistic since it depicts the actual appearance of the Great Bear Lake. However, the refracted portion of the film is more abstract since the shape of the lake is recognizable, but the distortion makes it different from what it actually looks like in real life. The shadow of the prism and the water bottle seen on the projected film could represent how radiation disrupts the flow of nature, preventing it from completely healing from its wound; almost like a scar that serves as a reminder of the damage that was done.

I chose this piece because I thought that the elements used to depict the situation of that region were very compelling. As a matter of fact, I was immediately drawn to the projector since it was loud and took up a lot of space. I was amazed to learn that not only was the projector meant to project the film of the lake, but that its sound also represented the physical and emotional pain that the Indigenous Peoples of that region were subjected to because of the radiation. It is one of the few times that I’ve seen Indigenous artwork exposed at a gallery. Hence, I wanted to dive deeper into the meaning behind this work. Overall, I think that the artists’ thoughtfulness really shows in this piece as every element is key in understanding how the mines negatively impacted the Native American communities on the site. I found it aesthetically pleasing and soothing to watch despite the loudness of the projector. After a while, the sound allowed me to be completely immersed in the world of the film, making me appreciate the artwork even more.

Photograph of Tsema Igharas' and Erin Siddall's The Lake is a Cup installation by author.

Lamia Lettifi studies Social Sciences at Dawson College in a program that focuses on Law, Society and Justice. During her fourth semester, she took an art history class, which led her to write an analysis about an artwork that captured her attention.