The Cultural, Economic and Dietary Importance of Seal Hunting for Inuit

For millennia, Inuit went undisturbed in hunting seal. However, since the 1960s activism against seal hunting has spiked, with organizations like Greenpeace, People for the Ethical Treatment of Animals (PETA) and the American Society for the Prevention of Cruelty to Animals (ASPCA) taking a hardline stance against what, in their opinions, are acts of unnecessary violence and brutality against the seal population. However, the practice of seal hunting is extremely important to Inuit communities, because it has significant economic, cultural and dietary importance, and as such, their livelihoods have become endangered by the anti-sealing campaigns and legislation of large, Western organisations and governments [1]. Seal, when brought back by hunters, has the majority of its parts used by the community. What remains is often the pelt, and hunters sell these to the Canadian government’s auction houses as a way to make money. Without selling seal skins for commercial use, Inuit would not be able to hunt and they, their families and their communities would suffer. [2] 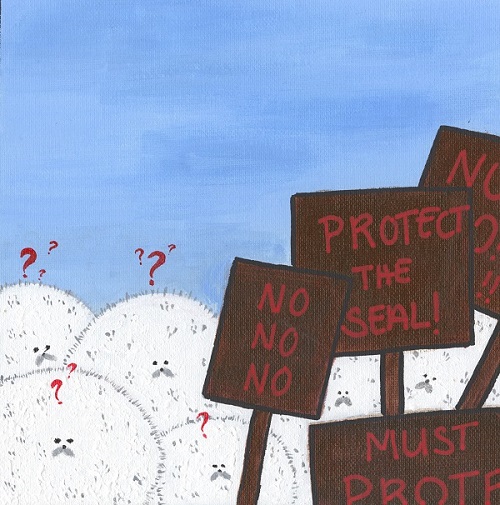 As well, the view of the anti-sealing movement are ethnocentric; they are based around what they  consider to be normal in their societies. In the arctic, there are not healthy and affordable alternatives in terms of food supply. For instance, did you know that as of 2016, a single can of Coca-Cola could sell for as much as $13 in Nunavut?[3] Therefore, without the commercial sale of seal skins, Inuit would be at an increased risk for food insecurity simply because there are no other reasonable, available options.

Further, the most important facet of Inuit seal hunting revolves around the cultural importance of the seal to the community. Hunters and hunting associations share seal meat (as well as meat from other animals) in community freezers. This kind of sharing is often a part of Inuit life from beginning to end. This sharing, in a sense, creates a respect for the seal and the nourishment it provides for the community. [4]

However, anti-sealing organizations often use out-of-context images of dead, bloodied seals as ads for their campaigns. Or, images of sad looking young seal pups (which are not hunted) with tears in their eyes. These images mislead people, and without having any knowledge of the importance of seal to Inuit culture, inherently cause many Westerners to participate in destroying an ancient and time-honored tradition that is deeply rooted in Inuit culture.[5]

So, what are Inuit activists doing in response? Well, filmmakers like Alethea Arnaquq-Baril have made documentaries like Angry Inuk highlighting the importance of seal to Inuit culture, livelihoods and well-being. Many Inuit have taken to social media, participating in widespread trends like the #sealfie and #huntsealeatsealwearseal hashtags in order to share what hunting seal means to them, while also combatting many of the negative campaigns that animal rights organizations have started. Some activists attended summits held by the European Union to lobby against the anti-sealing legislation and once the 2009 ban passed Inuit launched a lawsuit against the EU. Others continue to do important work here in Canada such as holding rallies on Parliament Hill in Ottawa. [6] This, all to bring attention and rally support for a critically important and wholly Canadian issue that holds the fate of hundreds of Inuit communities.

Dallas Binette is in her first year of the Social Sciences Program.