The Absence of Periphery

“You can look wherever you want.”

Scene opens with the audience. Lights dim as a hush overtakes the crowd. The low harmony of anticipation marks the beginning of the performance, anchoring the many sounds to follow. 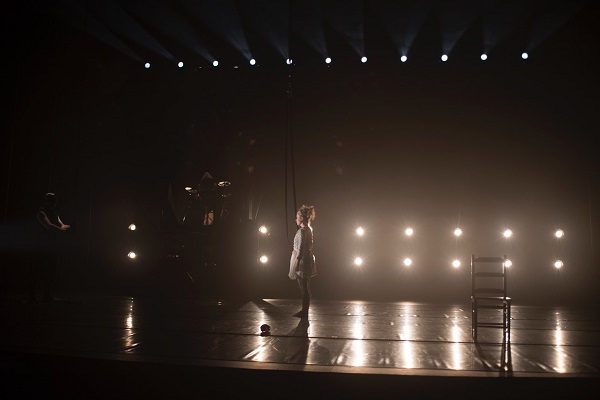 The hush, the applause, the laughter, and the collective gasp are the fringes of theatre, the ornate rim of lace around the raised collar. The fabric is an irreproducible shade, the blur of colour as your eyes roam the stage, the darkness of the ceiling and the backs of heads flickering in between the threads of curated story. There you find the hem, the precision of a thousand stitches you only notice when loose. Yet, these edges, the “liveliness of theatre” as Micheline Chevrier, artistic and creative director of IMAGO theatre, would call it, are as important to the theatre experience as the actor monologuing the skull into question and musing over the joys of the past.

For Chevrier, a well-known and respected figure in the Montreal theatre community for her award-winning directorial work, along with Cristina Cugliandro, associate artist and outreach at IMAGO, the shift in space made necessary by the outbreak of COVID-19 is not as simple as adding masks to the wardrobe and distancing team members. This change in space has meant the partial loss of life in theatre, a restriction of vision (literally and symbolically), and a shift in perspective for better or for worse.

For them, this age of confinement into technology and fear symbolizes the absence of periphery.

As I quickly learned from Cugliandro and Chevrier, there are some aspects of theatre that cannot be bottled into the technological constraints of this period in time, no matter how much optimism you infuse into the mix of webcam audio and network bandwidth.

“It’s not just about the space, it’s about the people in it,” one of them said as I hastily scribbled notes during our virtual meeting.

In this vein, IMAGO itself has not ceased operation, far from it, rather choosing to adapt to the current circumstances by continuing to pursue their vision of theatre.

“As IMAGO theatre we have a duty to engage artists and to give them some money, any money we can,” says Chevrier. “We would love to pay people just for developing work, but that’s not who we are. We are a presenting company. […] But I think we found a good balance, being in a space with performers to develop something.”

Take as example the ongoing collaboration between IMAGO and Pulse (Performative Urbanism Lab for Spatial, Social, and Scenographic Experimentation) referred to as “Feminist Performance and Creation in the City”. The project had originally intended to bring new meaning into urban sites through a mix of creation and research. However, without the ability to bring performers en masse to the sites, the team at IMAGO has instead turned to pre-recorded audio tapes to enable visitors to engage with the site and the performers while being relatively isolated.

As the team at IMAGO attempts to translate the liberties of their art into a virtually tightened format, employing cameras and other less than familiar techniques has become a reluctant necessity. “We feel limited by the frame”, said Cugliandro, who works closely with designer, on the impact of filming their projects. “Working with the lens if you’re not doing a film, it changes the way you’re capturing design. It’s not necessarily the full picture, not all the time.”

Cugliandro argues that camera angles and frames limit the scope of viewership, diminishing the ability to catch the action on the outskirts of plays. This movement at the edges is central to what Cugliandro calls the “danger” of theatre, the attractive force which sets theatre apart from film and pulls in equally enamored hordes of admirers. She makes it clear to me that the breath of theatre, the beating pulse and the warm flush, lie not solely within the presence of actors, but throughout an audience free to peer wherever they choose.

The importance of the choices in viewing made by the audience is echoed by Chevrier, who compares it to watching a play on a huge theatre screen, “You could get a little bit of that in the cinema with the community experience, but it’s not quite the same.”

She tells me a story about a child in attendance at one show: “He asked if we could play it again at the end. I had to tell him that he would see it again tomorrow, but some things would have changed.” She shares this anecdote with a smile. The shifting nature of theatre performances to her is like a visible birthmark; it’s an identifying characteristic, impossible to separate from the core of theatre.

Both Cugliandro and Chevrier are privy to an understanding of theatre space that transcends the room and the set. For them space is not characterized by the physical area or location alone. Space is equally intertwined with the people in a room and their ability to engage in whatever way they choose. An audience is given a unique performance every time they attend, the hush, the laughter, the applause, and the collective gasp shifting with each new viewing, subject to the invisible currents of decision attached to every individual viewer. The actors come onto the stage, (usually) in the same clothes, repeating the same lines, but subject to the unpredictable human conditions that render life loose in theatre; there are variations each time, some improvised on the spot, some accidental, but each new breath creating an unique performance and rendering the reception of it is wholly unpredictable as well. As Cugliandro put it, theatre has always involved risk.

Yet today, global risks have suffocated the concept of theatre she was so familiar with, forcing her and the rest of the team at IMAGO to rush to new lengths in order to revive the semblance of a cooperative art form.

For Chevrier and Cugliandro, theatre is synonymous with a sense of life, whether through the live show, the liveliness of the show, or the lives at the show. All these pulsing, breathing facets of theatre, however, have been forced to adapt to the closing of more traditional spaces, distorted into a vague memory and evolving towards brave new creations.

Going into my interview with Cugliandro and Chevrier, I expected the same optimism that seemingly everyone during this tumultuous time in history has heavy-handedly adopted in regards to the possibilities of online spaces. Yet what I was offered instead was a very strange and special dose of periphery, the acceptance of a limitation and the decision to make it work while fully acknowledging all the problems lining the outskirts.

As Chevrier puts it: “We are mourning, but it doesn’t mean theatre is dead.”

What is felt at IMAGO, as well as in our own homes, is an absence of life sprung free, or more specifically the lack of an audience swarming into the seats, free to contend with the art before them as they wish. The limit of frames and the tragedy of isolation echo through empty auditoriums, the sound reluctantly translated into virtual medium. For IMAGO theatre and perhaps theatres in general, the absence of periphery marks the loss of an authentic experience just as the illuminated screens before us mark the loss of normal life.

“Now, we’re learning to wait actively”, says Chevrier, as a pause pulls my interviewees into a hush of contemplation. They exchange amused smiles, before Cugliandro laughs her approval, a mere second of lag inhibiting the sound.