As you might have assumed from the title, yes this is another feminism article. But it's not like some of the others that talk about male-female equality. You see, I believe that women are superior than men. I’m not the only one: Melvin Konner, Professor of Anthropology and of Neuroscience and Behavioral Biology at Emory University makes the same point in his 2015 book Women After All: Sex, Evolution, and the End of Male Supremacy. His argument is that throughout history, the vast majority of physical violence and sexual exploitation—behaviors he considers destructive—has been committed by men. 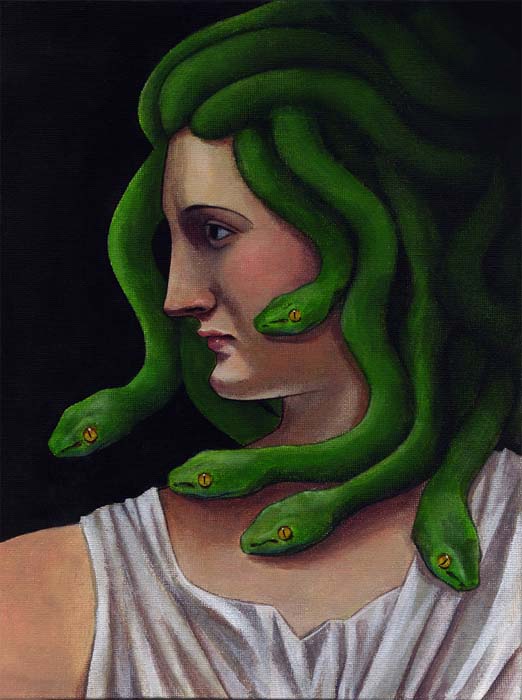 But let me tell you why I hold the same perspective, using a well-known myth to make my point.

Ovid, in his famous narrative poem Metamorphoses, describes Medusa as a beautiful maiden who was raped and turned into a monster by Poseidon, the G-d of sea. What does Poseidon's violence act reveal? To me it shows not power, but just the opposite: how scared he is about losing his ability to control a woman. This dynamic is explored in an article called The Timeless Myth of Medusa by Christobel Hastings, in which Hastings states that “... man [Poseidon] created a monster through fear of female desire” (page 7). In other words, this myth reveals men’s fear of women, in particular of women’s sexuality, which leads to their obsession with controlling women’s bodies.

After Medusa’s repulsive transformation from a beauty into a monster, Poseidon thinks  he had gained control over her. But she becomes an even more powerful creature. He fears that she will become superior to him, so he kills her. Once again, he believes he has finally won. But he hasn’t. Medusa’s legacy remains alive to this day, her myth still popular in today’s culture. As for Poseidon, he’s unknown to most people. It would be fair then, on that basis alone, to say that Medusa is in fact the figure who has emerged triumphant from that that mythic battle between the sexes. But to me what makes Poseidon inferior is his fear of Medusa’s power and his willingness to turn to physical violence.

You might be asking yourself, why is a dominant group threatened by a minority? Aren’t men the more fortunate sex? They have more power, rights and freedom than women. So why are men threatened by women? Why do so many of them still feel the need to show off their masculinity and dominance?

As a feminist, I am intrigued by this behavior. Men seem afraid that women will gain all power one day—the same power men have held for millennia in most of the world. This fear goes back even further than Medusa, back to Adam and Eve. Adam is submissive to Eve when she tells him it is okay to eat the forbidden fruit; he listens to her even though he knows what G-d had previously said. Adam is more concerned about Eve’s counsel than about G-d’s. This shows that Eve is an influential figure to him. But Eve is not allowed to keep her influence. As punishment for not obeying the conditions of Eden, G-d takes away her power and gives it to Adam. G-d also gives her severe pain during childbirth—perhaps not only because of her actions but also because He knows women are strong enough to handle the pain.

These two ancient myths in our culture reveal that women are in fact powerful figures, a fact men don’t want to admit it. I would suggest that we look at men’s preoccupations with taking power from women as a sign not of men’s strength but of their fear.

Naomi Ifergan is a 2nd year student in Cinema-Communications.