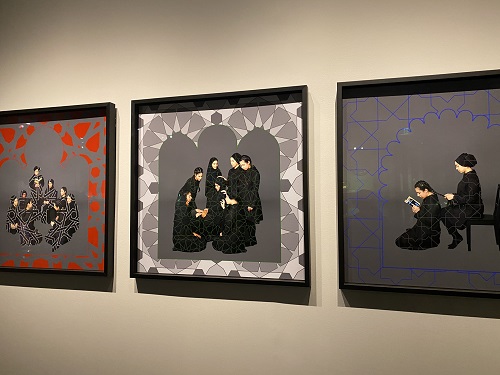 The piece Usthada [Woman teacher], Healing in the natural way, Transmission, One on One, by Arwa Abouon (left), is a montage between ornamental patterns and triptych photographs (Abouon, wall text). To achieve this effect, the artist ink-jet printed the lines and colour on a background to which she then added photographs of women (Abouon, wall text). This process generated very straight and angular lines resulting in distinct geometrical figures surrounding the equally sharp figures of the women. Not only did the artist frame three of her photographs with these oriental patterns, but we can also notice them on the uniformly black clothing of the women. Abouon also noticeably used grey as a background colour to contrast with the smooth black of the clothing and added a pop of colour such as red, green or blue. 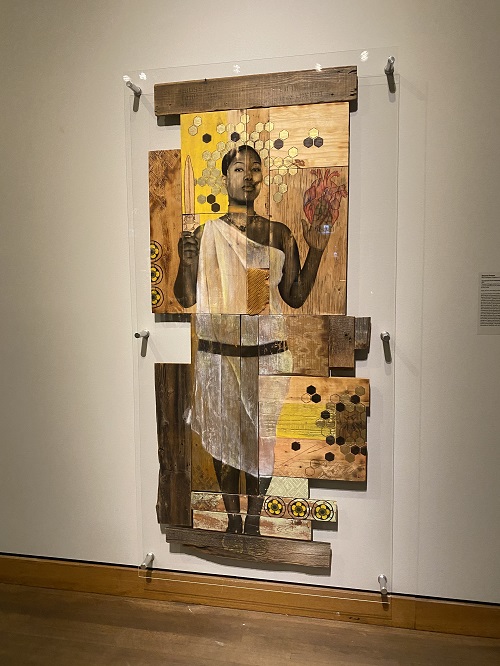 Memory Keeper, by Shanna Strauss (left), is a complex mixture of acrylic painting, engraving, printed fabric, letter print using stencil and photo transfer, all presented on an assemblage of wood. Even if this combination of a variety of artistic methods can seem very chaotic, we notice a certain order and coordination in this piece. While the woman and the heart in her hand are made of soft and smooth lines with very precise and realistic shapes, the various other patterns surrounding her are very geometrical and abstract. The use of rustic woods as well as the warm colour palette gives an earthy feel to this piece. Yellow, brown, gold, with a contract of red, all are a reminder of ancestral Africa.

Firstly, the artworks by Abouon and Strauss present the reality of African women with an emphasis on their existence within the influence of Western societies. In her work, Abouon used her experience as a Muslim North African woman to present the challenge of being within a Québécois society. She represents the dynamic between women in the Islamic religion and the role of transmitter of knowledge, something often disregarded in conversation about traditional “Muslim woman” in the Western world. Similarly, Strauss represents her ancestor, “Leti”, as a strong woman warrior who fought German occupation of Tanzania. Strauss mentions that she got this strength from “the love of her people” (Strauss, wall paper), something that is also represented in the piece by the metaphoric presence of bees, which can then relate to the idea of the importance of community represented in Abouon’s artwork. In both pieces, there is an emphasis on the importance of oral traditions in African cultures. In [Woman teacher], Healing in the natural way, Transmission, One on One, as the title suggests, the women are sharing and conversing while in Memory Keeper, the subject itself is the symbolic ancestral story. Finally, in both pieces there is a human central subject with abstract geometrical figures surrounding it which, in one case, are Oriental inspired and, in the other, remind us of Africa and its resources.

Both these pieces reminded me of my own identity as an ethnically African woman existing in a Eurocentric society. The strength of Leti in Memory Keeper when facing the German occupation of her country reminded me of the daily battle African women surrounding me had to face to defend their mere existence. The piece by Abouon reminded me of my own cultural legacy and the warm connection and dynamic I have with other Muslim woman in my life.

Wall text for Arwa Abouon, Usthada [Woman teacher], Healing in the natural way, Transmission, One on One, The Arts of One World, Permanent Collection, The Montreal Museum of Fine Arts, Montreal.

Hiba Aboufarise is a first year student in the Law, Society and Justice program at Dawson College. She was born in Canada but her parent both immigrated from Morocco and this response reflects her experience as a person of colour in Canada.