Nino Ricci’s The Origin of Species

While reading The Origin of Species, I experienced a number of feelings to say the least; I laughed, I cried, and I learned quite a bit about what it means to be human. 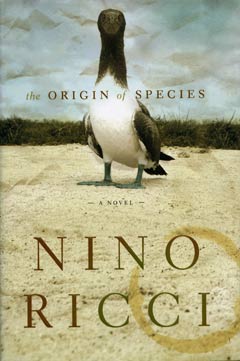 The Canadian author, Nino Ricci, has received recognition and numerous awards for his writing, in part for his inherent ability to bring his characters to life. It is clear to see that his writing is influenced by his Italian background, especially in this latest novel, for which he was recently granted his second Governor General's Award for Fiction.

The story takes place in Montreal during the 1980's, and revolves around the life of Alex, a young PhD English student. At the beginning of the novel, Alex meets and befriends Esther, a vibrant and genuinely kind-hearted young woman, who is in the middle stages of multiple sclerosis. As the story progresses, Alex's severe insecurities and troubled past are revealed. At times, the human condition appears rather bleak, but the Esther character is a consistent symbol and reminder of hope and the goodness of humanity.

Throughout the novel, as the title implies, a distinct parallel is created between the main character and Charles Darwin himself. Many of the relationships that Alex experiences are analogous to the association between Darwin and Alfred Russel Wallace, a professional natural history collector who lived during Darwin's time. Through research, he basically came to the same conclusions as Darwin concerning evolution and the origin of species. Unfortunately for Wallace, Darwin, having been the first to publish his findings, received the majority of the credit for these theories even though both men's works were nearly identical. However, Ricci makes it clear in this novel that Darwin needed someone like Wallace to exist during his time, someone who had similar ideas, someone to show the world that there was not only one man who turned away from creationism. In this way, Wallace was the one who pushed Darwin to take the huge and controversial step of publishing On the Origin of Species. In the case of the characters in the novel, Esther is the "Wallace" and Alex, the "Darwin". As Esther's condition worsens, Alex, by her side, realizes that she was his muse, his inspiration to take risks and to live to the fullest extent, despite his at times crippling insecurities.

This book hits particularly close to home. Esther was my aunt and my namesake. I am told that she was a wonderful and intelligent woman who made people feel instantly at ease in any given situation. She befriended the writer of the novel during her studies at Concordia University in the 1980's, where they both studied English. She was his biggest supporter in his early writing days.

The main character Alex has goals and ideas that are similar to those of SPACE. In addition to showing interest in the language arts and literature, Alex demonstrates profound curiosity for Darwinian evolution. His original idea for a dissertation topic was that of finding a way to link evolutionary theory to theories of narrative. His mission is to relate aspects of the Arts and the Sciences, which is precisely what Nino Ricci accomplishes in fantastic novel, The Origin of Species.

Credits for the image in this article go to the illustrator of the book entitled "The Origin of Species" by Nino Ricci (2008).