I unfortunately have not been to many art exhibitions prior to this one, and it is this very exhibition that has changed this forever for me: I will definitely be going to the Museum of Fine Arts, and other museums too, much more often, since I am now enthralled. In one word, L’Heure Mauve is breathtaking. Not only because of artist Nicolas Party’s sheer talent, or his intelligent use of other artists’ work— but rather it is a collection of such things. 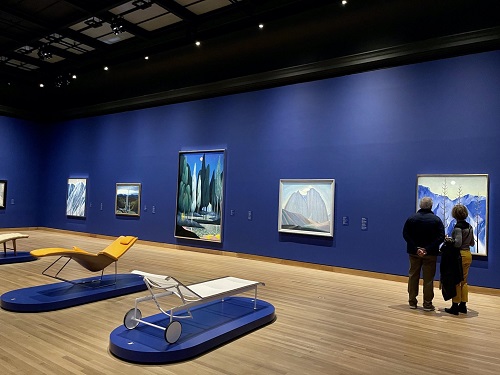 The exhibition as a whole is awe-inducing. L’Heure Mauve makes you work, it teases you with the idea that there’s something to uncover… but you need to search for it. Otherwise, the exhibit is just a flash of vibrant colours, although even at that, the exhibit is still incredible. If you work a bit harder however, you can get a truly unique experience and meaning out of it, as everyone will view his “clues” and symbolism differently. Thus, L’Heure Mauve even portrays the beauty of perspective. I found it to be like a story, each room a chapter, and each of them joined together through the placement of the art and doorways. For example, you start in a dark lush green room filled with art depicting forests, forest animals, trees and such. I took this room to represent the beginning of the world, nature in its perfect harmonious form, my main reason behind this being that it was the first room of the exhibit, beginning with a dim, calm, natural light with many references to a forest all around. Facing the doorway there is a painting depicting a chasm, which seems out of place compared to everything else in the room. However, it points towards the doorway and eventually points to a room further down the line that has a huge wall with a cave painted on it. The latter is a perfect example of how each room connects, making the exhibit greater than the sum of its parts. It truly feels like a story, and uncovering “clues” like in the previous example is addicting and captivating. The next room is painted all in red, and has sculptures of ancient wooden chairs, paintings of trees being chopped down by angry woodsmen, and a painting in particular depicting a mother crying, which seemed to me to be depicting Mother Nature. Her crying as she sees her forest and life being destroyed sums up the symbolism behind this room in my eyes. The next room is the “cave” room, where a world of industrialization and ruins seemed to be depicted, and the next rooms are in purple, pink and red respectively, the last room being in green, just like the beginning.

Two paintings, one from the “purple” room, and the other from the second “red” room are the ones that I will focus my reflection on, and, in my opinion, capture and summarize the experience that is L’Heure Mauve— if such a thing is even possible. 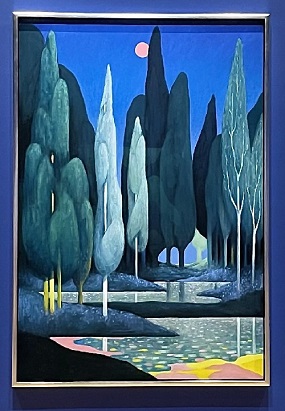 During my experience at the exhibition, I found this “purple” room to be the pinnacle of the exhibit. After all, it is called L’Heure Mauve, or “Purple Hour” in English. I thought Purple Hour to be a reference to the twilight hour, which occurs right after sunset, and before dusk (nightfall). The idea came to me after looking at the dark purple walls and then analyzing Party’s painting, Landscape, depicting something resembling twilight. Isolated images and objects which were orange in colour, such as the orange chair in the picture above, were present as well in this room. Amongst the purple walls, the orange items looked like the orange sun being swallowed by the purple sky of twilight. I think the sentiments associated with twilight is the driving force behind L’Heure Mauve’s message. I felt a sense of anticipation and imminence in the purple room. Twilight is the time right before night time, a time of mystery, crime, darkness, evil, etc. So it can be said that twilight fills one with dread and a sense of looming. Throughout the whole exhibit, I was waiting in anticipation to see what the next room had in store for me, just how one reads on in excitement, and maybe even dread depending on the genre, after finishing a chapter. Impending doom is the essence behind Party’s masterpiece in my opinion.

While the purple room and Party’s Landscape made me aware of the exhibition’s message and what it is, the red room and artist Peschier’s Vanité told me why. After the purple room, there’s the pink room, which is filled with paintings that clash with the bright, cheerful, pink walls as they contain subjects of death and decay portrayed by still life art styles. I view this room as some sort of foreshadowing for the next room, another red room, which portrays chaos and the cause of all the dead things of the room prior. Peschier’s Vanité depicts primarily death, represented by the somber tone, focus on detail and the obvious skull being the pinnacle of the painting. But my interest in the painting lies with the little details and their correlation with the artwork’s title. 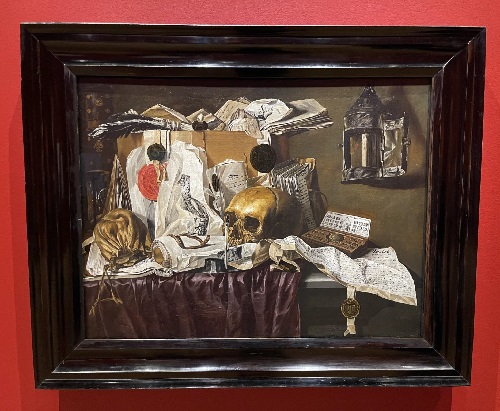 Around the skull, things, mostly works, associated with mankind are present, such as books, writing, a bag of coins, letters and music sheets. Next, the painting gives me a feeling that something is unfinished, incomplete, an overall feeling of dissatisfaction. This is embodied by the almost closed coin bag and the opened lantern. Combining all of the discussed ideas: death, the work of man and incompletion, in my opinion, I believe the painting tells the viewer that no matter how many things mankind tries to accomplish, death, a natural phenomenon, takes precedence, and can strike at any time, leaving your work unfinished. It would be vain to think otherwise… as hinted by the painting’s title! Alas, it is the death of man, caused by mankind’s blind and one-sided vanity, that is at the root of the exhibition’s overall sense of imminence, especially portrayed by its purple walls of Twilight.

So it is through this interaction that Party’s Landscape and Peschier’s Vanité coincide with one another. Their bond is held together by the fight between man and nature, which is at the heart of L’Heure Mauve. Vanité is surrounded by the intense, aggressive colour of red which contrasts with the cool, subtly warning purple color surrounding Landscape. Even though these two paintings are quite different in art style and are separated by almost 400 years, like many of the artwork within this exhibition, they are connected. It is in my opinion, as I mentioned earlier, that their connection is the most important, as they depict the essence of what this exhibition attempts to educate us. The World starts off with Nature at its peak, beautiful and harmonious. Man comes around and uses it, hurting Mother Nature and destroys her child. The more we build, however, the more we feel this impending doom, that something awful is going to happen. Everytime we look at Twilight, we get the same feeling, the calm before the storm, in this case being night time. But we know it’s beyond a mere darker sky, something is even darker at play. The latter is our downfall, caused only by our own vanity. We think we can control, but in the end, we are just subject to nature, just like all other living beings on this Earth.

And that, is what I not only understood, but felt, during my visit at Nicolas Party’s L’Heure Mauve.