I’ve chosen to look at the similarities and differences between Formal Gathering and Hongtu’s Zhang’s Mai Dang Lao (McDonald’s). 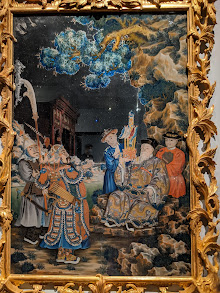 Formal Gathering is an oil painting done on the back side of a sheet of glass that illustrates a meeting between a high-ranked civil servant and two military officials (Unknown artist, wall text). The figures in the 18th century painting are heavily stylized as their faces seem to be very disproportionate, lacking depth and shading, and their limbs are short and contorted. Emphasis, however, is placed on the clothes adorned by the figures; long sweeping strokes are used to define the folds in the clothes, while short delicate strokes are used to create the intricate patterns of the fabrics. Vibrant reds, blues and golds are used for the fabrics, further emphasizing the clothes.

Mai Dang Lao (McDonald’s) by Hongtu’s Zhang is composed of four cast bronze pieces that take on the look of a McDonald’s trio including a meal box, fry box, fork and knife. The pieces are enhanced with traditional Chinese motif textures which create curvy, flowing lines across the works. Despite being made of bronze, the pieces resemble jade as they have a green oxidized hue to them.

Hongtu Zhang’s bronze pieces were made in 2002 (Hongtu Zhang, wall text), while the Formal Gathering was painted in Guangdong province of China in the 18th century (Unknown artist, walltext). Even though the two works are made of different media, in different time periods and 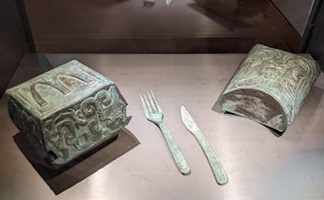 geographical locations, they still share similarities. I think that their style is the most apparent similarity, as both works are stylized; visually, both pieces take inspiration from traditional Chinese art and history. The painting is a clear representation of ancient times in China, while the casted pieces show a new take on modern fast food with traditional Chinese patterns. Style isn’t their only similarity, as they both have a similar subject matter. Formal Gathering was painted during an era where Europe was experiencing high demand for Chinese art as it was viewed as exotic; with the high demand, China was glad to cater to the needs and thirst of the Europeans (Unknown artist, wall text). Centuries later, Zhang would create Mai Dang Lao (McDonald’s) in order to show “expansion and permutation of cultures” with the shrinking of geographical borders (Hongtu Zhang, wall text). He encourages the gain of new perspectives through cultures as a way to eliminate prejudice. I found that both works look at different ways that cultures integrate with one another and show the evolution of the idea of shrinking borders. Originally, new cultures were desirable because they were seen as exotic, whereas now, opening to new cultures is seen as a way to tear down stereotypes and gain worldly perspective.

I chose these works because I’ve always been drawn to my Chinese heritage and the stories behind these works really interested me. I was born in China, but raised Portuguese so I’ve always felt like an outsider when looking at anything traditionally Chinese. I was intrigued by the ever-evolving idea that one day all cultures will be integrated and accepting of one another. I chose these works because they allow me to see the evolution of how society views different cultures. Seeing how that idea evolved through art and time gives me hope for a borderless and limitless future.

Chloe Costa is a second-year Health Science student at Dawson College. Chloe was born in the Chinese province of Hunan and grew up in a Portuguese immigrant household.