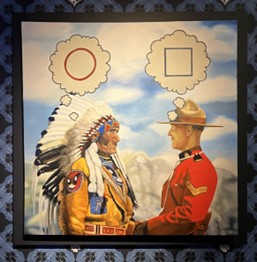 A noticeable feature in David Garneau’s Not to Confuse Politeness with Agreement from 2013 (left) is the colors utilized by the artist. The magenta, cyan and brownish-yellow are all very bright and bold. The striking colors contrast the darkness of the situation depicted. The artist used mainly the three primary colors, as well as some white and black for a few elements. Garneau’s lines are clear and show no hesitation, as they do not bother to appear delicate or subtle. The composition of this painting depicts Ubi-thka Lyodage, an Indigenous Chief, and an unnamed RCMP officer (Garneau, wall text) face-to-face, opposing each other. The background of this image is blurry, bringing the focus back onto the two characters. Finally, neither of them have eyes, and their expressions are once again opposed; the RCMP officer is smiling and the Chief is frowning.

The Adoration of the Magi (right) features a more classical, Catholic-influenced style of painting. The colors are soft, possibly washed away by time and wear. There is an emphasis on upholding a standard of sensitivity and beauty throughout the painting. Melchior, Balthazar and 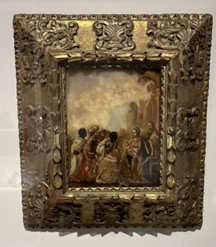 Gaspard, the three mages, are depicted with a very dark skin tone and lavish, luxurious clothing. The artist used a technique called “brocateado” on these characters, which aimed to highlight certain details by using gold sheets (Quito School, wall text). The background is relatively simple, to keep the attention of the viewers on the foreground, where we can observe the mages, the Virgin Mary, and baby Jesus. The heads of Mary and Jesus are surrounded by a golden crown, signifying their importance. They are all lined up in the bottom half of the painting, which makes it appear crowded and dense. The upper half of the painting is uncluttered, with the exception of mountain peaks, colored in a grayish-blue and red.

First and foremost, both of these paintings have as their underlying theme the struggle of Indigenous people in America. The painting by Garneau depicts the misunderstandings and lack of communication that plagued Indigenous communities in North America for centuries. The perceptions of the two figures are shown as opposing, but neither seem to realize it just yet. In The Adoration of the Magi, the initial intention of the painting is not to criticize or comment on the struggles of Indigenous communities, but this notion is still relevant. As mentioned on the wall text, art was a frontrunner in aiding the Church’s quest of evangelization and conversion of Indigenous groups. The Catholic Church used techniques such as art to diffuse positive images of the Church, as well as formally training Indigenous individuals in the arts. Consequently, most of the 18th century artists in America were Indigenous, who aided in the creation of regional schools (Quito school, wall text). Both paintings offer insight into the situation of Indigenous groups in America, at the time of their creation. Garneau’s painting shows the indoctrination of these groups in a more objective way, but The Adoration of the Magi is a direct look into this process of cultural colonization and how the Catholic Church stealthily forced Indigenous groups into denying their heritage and turning to the Church.

I chose these particular works for many reasons. Firstly, most museums feature very few, if any, Indigenous artists. There is an apparent disparity in this cultural sphere. The Adoration of the Magi, although praising Catholicism, was still created by an Indigenous artist, which is worth celebrating. Furthermore, I personally adore classical art, but found it difficult to truly enjoy this particular painting due to its connotations, so choosing it was a way to appreciate it, whilst still looking at it with a critical eye. Finally, I chose Garneau’s painting as it struck me as soon as I entered the exhibition, and stayed with me for the remainder of my time there. I thought it depicted this very troubling and dark situation with beauty, and it deserved a deeper analysis.

Wall text for David Garneau, Not to Confuse Politeness with Agreement, The Arts of One World, Permanent Collection, The Montreal Museum of Fine Arts, Montreal.

Wall text for Probably Quito School, The Adoration of the Magi.  The Arts of One World, Permanent Collection, The Montreal Museum of Fine Arts, Montreal.

Alice Latendresse is currently in her second semester at Dawson College. She is studying in the Law, Society and Justice program.