Imagine red. Seriously... Think of a vivid shade of cherry, so bright it borders on the fluorescent. Now, visualize scarlet liquid. Pools and pools of it, flowing lazily across a surface. Imagine deep, red fluid trickling out in steady streams onto your plate. If you’re thinking about blood, don’t be embarrassed by your vampiric tendencies (It happens to the best of us). If you’re thinking about ketchup; then you and I have a lot more in common with the ancient Romans than we might have originally thought. Modern-day humans aren’t the only ones with their minds on condiments; in fact the ancient Romans might have been the sauciest of us all. 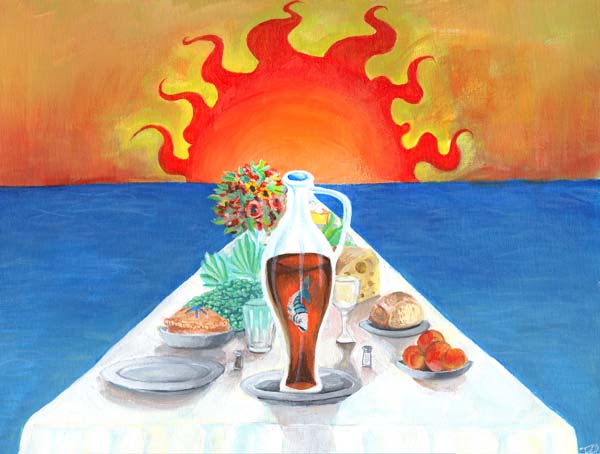 Before you, dear reader, start questioning the sanity of this (only mildly frenzied) author, I implore you to endure the incoming explanation as to how I arrived at my seemingly strange conclusion. Well, once upon a time, yours truly walked into her Greco-Roman Traditions class to find a table laid abundant with what a group of Classics-obsessed teenagers classified as “Roman” food. As you might have already guessed, this feast consisted of bruised grapes, grape juice, grocery-store baguettes, and an incongruous, but hugely appreciated box of chocolate biscuits. My teacher was obliged (under the strict set of laws that teachers are bound to by blood oath) to turn this otherwise chaotic gathering of starved adolescents into a teachable moment, a stunt he accomplished masterfully with the aid of a documentary on Roman food and culture.

The documentary focused on ancient Roman meals, finding the majority of its comedic relief in trivializing the Romans for their scandalous use of (gasp) pepper and the all too unholy protein that is bull testicles. In actuality, most of the featured dishes were not too unusual, consisting of modern classics such as roasted leg of lamb, stewed vegetables, bread, cheese, and of course diluted wine. Yet, it was one particular dish that brought about the general outcry of my classmates in what I considered to be an unprecedented manner: Garum.

Garum was a popular Roman condiment, “used [...] more frequently than salt, and [...] manufactured [...] across the Roman Empire” (Edwards). It was a sauce made using whole fatty fish and/or their blood and guts. These were then brined and fermented to create the salty concoction that is garum (Edwards).

My classmates gasped and groaned at the sight of garum, at the description of its production and the ingredients it employed. I blame their reactions on the documentarians, who were of  no particular service to the general concept of garum as they winced at an exaggeratedly bloody clay pot filled with fish offals.

While my peers tried to hold back the contents of their stomachs, my mouth watered. “Garum is just like ketchup,” I thought. It’s just like ketchup or soya sauce or marmalade. “In fact”, I said out loud to a room of nauseous Canadians, “Garum is basically just fish sauce!” The comment aroused an array of responses from the approval of my fellow Asians to looks of disbelief. “Ewww. No thanks,”  someone said and I rolled my eyes.

In my opinion garum is basically just antiquated fish sauce (an essential addition to most contemporary Asian dishes), and culinary experts agree. Robert Curtis states for the American Journal of Clinical Nutrition, “Romans enjoyed numerous foods that are identified today as containing significant amounts of natural umami substances and frequently used fish sauce as a condiment in their recipes. Fish sauce imparted to Roman dishes a moderately salty, slightly fishy taste that combines synergistically with other foods to create the umami flavor” (Curtis 7125). Therefore, contrary to popular contemporary belief, garum was not a disgusting fish brew that the Romans drank by the gallons, but a mild umami-enhancer used in addition to other ingredients in Roman recipes––imilar to how ketchup is used today in Western society.

When I first came to Canada, I had ketchup for the first time. I tasted real ketchup, not the fermented tomato sauce that my home country’s stores loved to pawn off as the real thing. A testament to my adoration is the sheer amount of ketchup that has consumed my life since I first savoured the sweet condiment. Nothing edible in my vicinity was safe from the addition of ketchup; shepherd’s pie obtained an additional layer, fries swam in puddles of tangy sauce and pizza doubled in tomato product. This continued until until eighth grade, when a deeply-concerned doctor’s admonishments curbed my addiction. The point being, as an immigrant experiencing for the first time a product that had been almost completely foreign to me for my decade-long existence , I did not turn away from the prospect of trying something new. I owe this attribute to my parents who, like many other immigrant parents, were so involved in the task of settling into a new home that they made certain their children reciprocated the acceptance  they so desired from others. My sister and I were never forced to enjoy something, but we were obliged to give everything a try so that we could form educated views.

When I noticed the general reaction to garum, I could not help but feel that while society has made progress in theoretically accepting other cultures and their foods, it has failed in instilling within people the desire to actually try something new and form their own fact-based opinions. In the age of the internet, it is easy for one to believe they have acquired first-hand knowledge of something when all they have usually done is acknowledge a secondary source. The downfall of this kind of belief-system is that far fewer people  go outside and actually try anything for the sake of trying anymore. Thus, we are vulnerable to believing the first website we stumble across with little to no scepticism. Can you blame us? It’s all too easy, to not want to put in effort in a world where the need for human effort is being diminished with each passing day. However, the only aspect of humanity which distinguishes us from animals is our curiosity; our inherent lust for knowledge which drives us to search, to try and finally to know.

Taste is one sense that is uncompromisingly subjective. Take for example, durian; Considered by many to be the stinkiest fruit in the world and inedible, others go to special markets in Asia for all-you-can-eat durian banquets. Some of my family members eat questionably large amounts of durian, while others cannot stand to be in the same room where it is being eaten. Thus, I present to you, a fruit which upon tasting presents a unique flavour profile to each and every individual.

Incredulously enough, I have seen my classmates consume meals that (by virtue of existence) contain fish sauce like pad thai and ramen. Yet, the moment they watched one video discussing a condiment they assumed was completely foreign to them, they wholeheartedly agreed with the documentary’s host that garum is disgusting. These sorts of treacherous leaps to weak conclusions scare me, because we live in a world where your opinion can be all-consuming. Whether in politics or in the classroom, I would like to think that the world would be a less scary place (or at least debates would be a less pointless), if we all tried to inform ourselves through first-hand knowledge. After all, how do you know what you haven’t tried?

Dinu Mahapatuna is a 1st year student in Liberal Arts.