Fading Echoes or: A Persistent Buzz That Yet Rings On 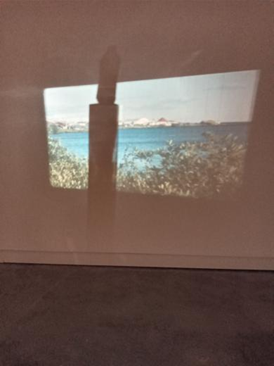 The charming and perhaps retro piece pictured to the left is called The Lake is a Cup, and was created by Tsēmā Igharas and Erin Siddall in the year 2021 as a part of the Great Bear Money Rock series. It is a sense-encompassing installation, consisting of an old 16mm projector, a plastic water bottle, the crystal pillar upon which the bottle sits, and of course the projected image itself.

The installation appeals to both the visual and aural senses. The projector is an intricate creation of countless parts, ranging from big to small, all working in perfect tandem, whirring away in harmony to create the image projected upon the wall it faces. It is coated on most surfaces in a mute green, evocative of many machines of its era. The pillar is tall and clear, yet the water bottle adorning it is slightly faded, and both of these objects refract the light projected by the projector, even if only in small parts, leaving blank spaces in the image, and warped slivers of light upon the wall further away. Lastly, the image itself is a bright, mid-resolution quality image which is, as mentioned, projected onto the wall, portraying scenery of lakeshores and other such landscapes found in the area surrounding Port Radium, an old abandoned uranium mine.

The subject matter of the piece is quite pertinent to the overarching theme of the MOMENTA exhibits, being our connection, as humans, to nature. How we treat it, what we take from it, what we give back to it, the mess we make of it. The Lake is a Cup, being a piece at the Vox gallery, focuses on the aspect of water in contrast to UQAM’s land theme. Specifically, it focuses on the idea of water’s intrinsic memorial properties. The video projected onto the wall shows an old abandoned mine, Port Radium, in the Northwest Territories. The water bottle upon the pillar was found at the site and brought back to be a part of the piece, to show a more tangible sliver of evidence to the radioactive landscape that was left behind once it was no longer desirable to mine at Port Radium. The water in the bottle is of course only a tiny fraction of the amount of water that was polluted by the mining of uranium. The communities living near the mine, which was closed back in 1982, are still suffering the ill effects of the toxic radiation leftover from the mining operation. The damning realization is that of course an image is merely an image, and standing in the light of the projector, in the wake of the visual replica of the poisoned water, will do nothing other than perhaps momentarily blind you in the bright light, whereas the actual water pictured, still present and flowing in and around Port Radium, contaminated, radioactive, and imaginably quite harmful to wade through, could impart all forms of harm; not only in the form of radiation poisoning, but also potentially cancer, and worse still, telescopic genetic defects, invisible to the eye until an unfortunate and damaged child is born of an irradiated parent. 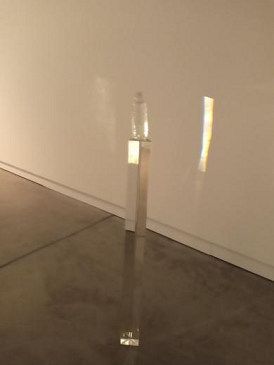 Lastly, my personal take on this piece. This one destroyed me. Well, not literally, but I was having quite the long day and it resonated with me in just the right way; it spoke to me on a level that none of the other pieces I had seen that day ever could have. It speaks to me of trauma that is carried down through the ages, brought on by a seemingly unstoppable force, tearing through one’s environment and then vanishing, all the while leaving traces of damage and toxicity that can breed further damage and toxicity in turn. Something missing, stolen away in an untimely manner, leaving desolation and disease in its wake. All the while, the projector whirrs, spitting the image for all to observe but few to truly see. This unruly and unforgiving damage that tears through families and communities and leaves a sad, sorry state of affairs in its wake. Unseen but harsh, ever harsh, cruel even, continuing to hurt, by and by.

Sometimes, things, places, or people, can be taken away swiftly and furiously by forces unseen but eternally damaging. They become missing pieces, slivers of the image missing and distorted, never to be recovered, only to be observed in hindsight, a fading echo, like the silent but omnipresent whirring of an old projector.

Photograph of Tsema Igharas' and Erin Siddall's The Lake is a Cup installation by author.

Patrick Knowlton is currently studying in psychology at Dawson, but does not limit himself to a single discipline—he loves the arts.