Cultural Bridges and Clashes in Art

As time passes, we meet people, make connections, and build relationships. Whether these interactions lead to beneficial or detrimental consequences for either party is unknown, but as humans, we know that contacts with other individuals will occur. At a larger scale, different populations can meet each other as well. I would like to show these cultural contacts by discussing the similarities of two contemporary works of Art: Untitled (Moundbuilders – Hamburgers) Bowl (2011), by Diego Romero, and Self-Portrait (2017), by Manuel Mathieu. 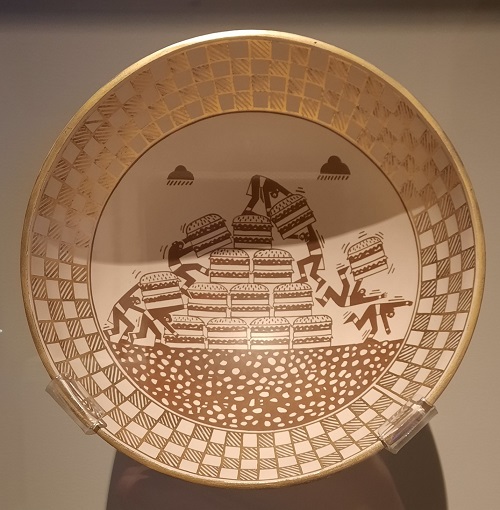 On Diego Romero’s slipware bowl, the artist depicts a few “Pueblo” people trying to make a pyramid of giant Hamburgers (Romero, wall text). His simplistic use of two-line hatching shows how unstable these individuals are. Furthermore, the artwork is monochrome in hue, value, and intensity, using only a glossy bronze—reminiscent of the South-American Indigenous culture­—to indicate both the ground’s rocky texture and the character’s quasi-linear shapes, which makes the most out of an extremely simple composition. 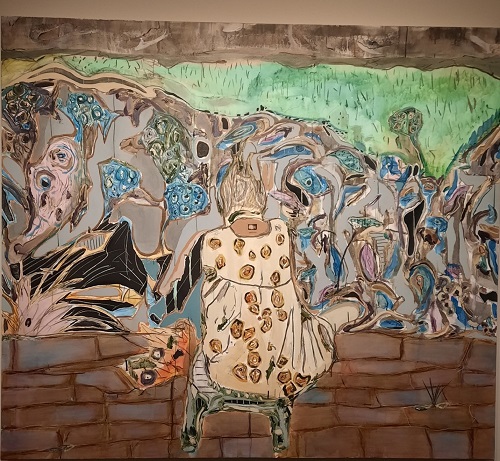 In terms of intersections, both of these artworks describe a cultural contact between two very different societies. However, Self-Portrait and Untitled (Moundbuilders – Hamburgers) Bowl show two antithetical consequences of this contact. While Mathieu’s work displays a pluralistic identity caused by the harmonization of his Haitian ancestry and Canadian citizenship, Romero criticizes the negative effects Western society has on Indigenous communities. In a sense, these artworks offer two different sides of a single coin: one shows how cultures can coexist with each other, while the other shows how they hinder one another. Furthermore, both artists use techniques that emphasize their ancestry all the while describing a very contemporary issue. Self-Portrait ”evoke[s] Haitian gardens” (Mathieu, wall text), but the scenery that is presented is located in Blainville, making the issue of an immigrant’s identity quite clear. Similarly, Untitled (Moundbuilders – Hamburgers) Bowl conjures, through the use of hatching motifs and traditional pottery techniques, South American tendencies; however, it describes the difficulties that capitalism has brought to minorities such as Indigenous peoples.

Finally, I chose these two artworks because they mirror the cultural contact that constitutes part of my own identity: I was born in Canada to a Spanish father and an Egyptian mother. I have always been exposed to many cultures at once because of my upbringing in a multicultural environment. Consequently, I enjoy observing how different World Views interact with each other, and these artworks permit me to analyze these interactions. In other words, I see a reflection of myself in the artworks, which leads me to believe that I will be able to better understand what my heritage implies by inspecting them.

Gabriel Gonzalez Hashem is a first year Health Science student at Dawson. Despite his STEM background, he believes that the Arts are complementary and necessary to any program, as they offer a more creative, diverse, and rounded way of thinking than other, more structural methods of learning.