Almost every day behind my house in a residential area of Montreal, a squirrel crosses an electric wire. Sometimes it runs as fast as possible; other days, clutching a morsel of food from my neighbour’s trash can, it takes its time. 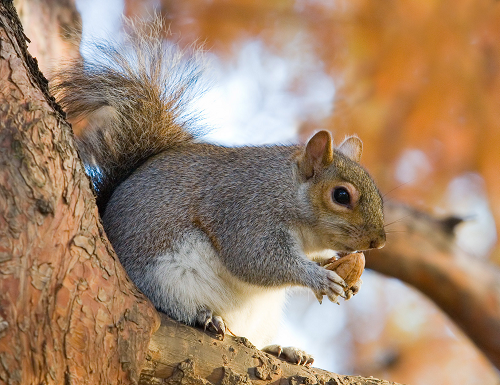 Ever since humans settled and developed cities amidst their habitats, the existence of North American grey squirrels has undoubtedly changed—as has that of other animals that now find themselves living in urban areas.

In cities around the world, humans interact with animals on a regular basis, from goldfish to kangaroos. However, with the exception of animals that have been domesticated as pets or else selected to meet human dietary needs, it is only relatively recently that we have begun to contemplate how we impact the vertebrates with whom we share urban areas. When faced with animal infestations, overpopulation or predator-human conflict, our automatic responses have often been forced relocation or extermination. Meanwhile, animals faced with our encroachment on their territory have been forced either to adapt––radically changing their behaviours and even evolving genetically––or to leave.

In New York City, for instance, the white-footed mouse is beginning to adapt to fattier foods. Some birds have also started to sing at a higher pitch than they have historically, because of traffic noise (Toomey, Diane et al., 2018). Further south, many seriemas, birds native to South America, have been forced to learn how to use tall buildings for mating or defense calls while also finding and consuming cat food as a legitimate source of nutrition, which has created new conflicts between them and felines. The seriemas, like many recent urbanites, have also changed their behaviour to avoid cars and traffic (Alexandrino, Eduardo R., et al., 2019).

The herbivorous rose-winged parakeets, living in cities across India, Europe and America, have adapted their diet to include human vegetarian food sources available in the city. By anthropocentric standards, these avian creatures are also incredibly smart, able to count and recite vocal sequences, to recall past events, and to engage in complex problem solving tasks, all of which have aided in their adaptability. In general, although much of the animal kingdom would have a hard time fully adapting to urban geography, birds rarely require any specific natural relief to survive (Çaliskan, Onur, 2018), allowing them to prosper in urban, and suburban, regions.

At the top of the food chain, large carnivores, such as cougars, tend to have what is known as “behavioural plasticity.” This means they can survive, and even thrive, in new habitats more easily than many other groups, as long as they have access to enough resources. As “opportunistic predators,” the resources in question can differ greatly from those in their usual habitats. The cougars that have adapted to cities have acquired new diets of domestic animals, either in addition to their regular diet of ungulates or completely replacing it. However, this change also means that new ecological relationships are forming, breaking historical ones and changing food chains completely (Moss, Wynne E., et al., 2016).

Unfortunately, for certain species, no matter how they try to adapt, they remain pests in the minds of human city-dwellers, and find themselves at risk of either relocation or extermination. In Australia for example, kangaroos tend to overpopulate areas and various measures are taken to prevent this. Lethal measures are often the first choice to control their reproduction, but many kangaroos are alternatively relocated to suitable habitats. In the majority of cases, they tend to do fine and have low rates of death while adapting to their new environment, but, on various occasions, the risks overtake the caution that scientists put into moving the animals. These risks mainly include new territory being difficult to navigate, road proximity increasing accidents and illegal hunting. In one study done near Perth, the first “detailed assessment of a large scale Western Grey Kangaroo relocation,” around 80% of the kangaroos did not survive relocation or the post-release life. The conditions for relocation seemed perfect in this case: there were already Western Grey Kangaroos living in the new location and autopsies later showed that they were not lacking in resources. That being said, the culprit was likely capture myopathy, a stress-caused disease that can entail physical damage potentially deadly or harmful enough to require euthanasia. It’s not uncommon for macropods such as Kangaroos to be affected by capture myopathy and this tragic outcome is usually brought about by capture and transport. Scientists were planning to monitor the kangaroos after relocation with cameras, collars, and other forms of animal tracking but were unable to because of how many died. Only six collared kangaroos survived and it is possible that the collars contributed to the stressors that gave them capture myopathy (Cowan, Mark, et al., 2020).

Unlike kangaroos, some species are not overpopulating or doing much harm in cities but are still unwanted by residents. A study done in Japan showed that 77% of respondents “disliked” having hornets live in their general residential areas even if they weren’t actively hurting anyone and naturally live in those locations. That same study also found that 51% of respondents were neutral towards wild boars, another animal that would naturally be found populating the area if it weren’t for urban expansion. The city where this study took place intends to create more green spaces,  but the general population appears to be opposed to certain endemic species occupying them. Age, gender, parental status and exposure to animals all appear to play a role in how people feel about “nuisance animals.” In this particular study, older people, women, people with kids, and people who didn’t grow up around animals all tended to express more disdain for the creatures than their counterparts did (Hosaka, Sugimoto, & Numata, 2017).

There are potentially logical reasons why we might want to get rid of city animals or prevent them from fully adapting to city life. Some issues are more complicated than simple annoyance. For example, the aforementioned cougar’s inclination to eat domestic animals in urban environments leads to more human interaction, which negatively affects the felines. There are also new possibilities of disease dynamics for these animals, who are eating new prey with new pathogens. Moreover, animals in the wild that once had the population-controlling cougars to keep their numbers down might be left without the carnivores if they continue to move towards cities where prey could be easier to find (Moss, Wynne E., et al., 2016).

It’s important to note that not all species are able to adapt as well as the ones we track. The species that aren’t as versatile tend to be harder to record, because, in addition to the many that move away from cities as they expand, a lot of animals don’t survive those expansions. When a population of animals doesn’t live long enough to adapt to cities, we can never really know the full story of how they got wiped out (Toomey, Diane, et al., 2018). As usual in nature, when one condition changes in a system, there are many possible consequences.

Ixodes Ricinus, Europe’s most common tick species, is often a vector for pathogens between species, including humans. While humans expand our cities and more wild animals cohabit with us, we have a higher chance of being exposed to I. Ricinus and similar risks. As of now, the main hosts for these ticks in urban areas include rodents, lizards, domestic mammals, etc. Just outside of those areas, hosts include foxes, deer and wild boars. Increasing the area that we take up gives those animals just on the outside more and more opportunities to interact with them and us, allowing the ticks to spread pathogens. A study was done in Switzerland regarding these pathogens that a few specific tick species, especially I. Ricinus, carry. The study was focused more on the pathogens than the ticks themselves, so they found no evidence of increased tick density in any one area. However, they did find that collection was easiest in spring, meaning risks of tick bites may be higher during that time of year. In general, they also found, perhaps unexpectedly, that the risk of contracting diseases from these ticks in cities is as high as it would be in rural parts of the country. Additionally, 20% of infected ticks carried multiple pathogens at once, so there’s a chance that someone who gets bitten by one could contract multiple diseases at the same time (Oechslin, Corinne P., et al., 2017). This essentially means that, as urbanisation increases, we are also increasing our exposure to dangers that haven’t historically been common in cities.

Ultimately, there have always been interactions between humans and wild animals, but the nature of these interactions has dramatically changed as humans have deeply affected the environment. The escalating number of conflicts between nature and civilization requires that the scientific community use every tool in their toolbox to promote harmonious and constructive interactions between humans and the non-human animal kingdom. With climate change, mass extinctions and the incredible pace at which we develop technology, there needs to be more consideration of the long-term effects of our existence on the planet, including our fellow animals, for the sake of our own long term survival and theirs. Even if we can keep many species alive as we increase in population and expand into new territory, we are still fundamentally changing many species’ relationships with the environment and each other, which isn’t necessarily a sustainable practice, possibly having just as bad long-term effects as causing extinctions.

Many solutions have been suggested, but the most mainstream option at the moment is the idea of creating “green spaces” in cities, where wildlife can theoretically thrive in the midst of civilization. Menno Schilthuizen, a biologist, suggests that if we were to make more urban green spaces to try and make up for the destruction of nature in the name of urbanization rather than halt it, we would need to accept that the use of native plants and animals would not always be the best choice compared to species that have already adapted to urban life in the same environment. This, in turn, might mean certain native species would have to be consciously ignored and possibly allowed to go extinct. Schilthuizen notes the importance of keeping pristine natural environments for indigenous organisms to thrive for that reason (Toomey, Diane, et al., 2018).

Our desire to protect nature while simultaneously being the greatest threat to its continuation depends on what we choose to do with the spaces around us. The certification of land all across the globe appears to be one of the main uses of territory that humanity as a whole has chosen to protect the natural world, but the “green spaces” within those cities are becoming a novel option for putting our urban spaces to sustainable use.

All in all, intervening with nature has always presented us with both risks and benefits. However, the Earth is fundamentally changing at an unprecedented pace, and we, as residents on this planet, must balance our own ambitions with the necessary preservation of the natural world for the future of life itself.