Slouched over my desk at home, one-hour into online French class and I’m scrolling on my phone, my mind miles from here.

A voice on my laptop screen calls my name and I stumble to click “unmute”. I try to look attentive and interested.

My professor asks me a question and my answer is a mix of general knowledge, unclear opinions and hand gestures. I use “you know” as a crutch and thrash through my reply. My professor’s eyes narrow. Concluding with a feigned passion for French contemporary poetry, I mute myself and sit back, hoping to distance myself as much as possible from the judgmental stares of my peers.

Truth is, I couldn’t be further away.

My classmates are nowhere near me, each wrapped up in their personal bubbles. We’re spots on a connect-the-dots map, meeting only through lectures and dry group chats. 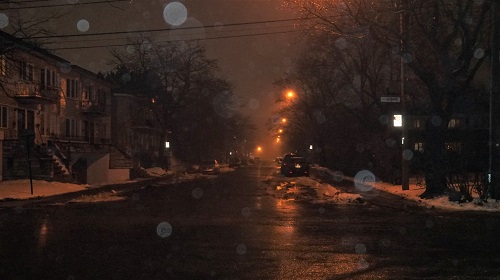 The college seems further away still. I’ve only been twice. I’ve heard from the second years about what a magical place it is. The rumbling of conversations in the cafeteria, the vibrations in the floors as students rush to class and the heavy focus in the air of the library. The kind of atmosphere that says, This is where important things happen.

Two hours into French class and I’m making up games. My screen reminds me of a chessboard, every square filled with a tired face. Each expression identical to the next. I see the thin lines between every box; black pixels hint at the miles between us. One student’s neck is cut off by his camera. Below him, a headless torso fills the screen. Together, they form a patchwork monster.

I wake up and my cheek is ice. I reach up to touch it, but my fingers are ice too. A light layer of snow covers my sleeping bag. To a passer-by, I’d blend right into the landscape. A bench, maybe. Or a rock.

I push myself up. My head hurts. Everything hurts. Pain shoots down my legs and burns in the soles of my feet. Snowflakes get caught in my eyelashes and I stick out my tongue. Ever since I was a kid, I’ve had terrible luck catching snowflakes. The biggest ones always flew out of my way.

I don’t wait for the police to find me. I wrap up my sleeping bag and make my way through the park. It looks like Narnia. Tree branches slope under heavy blankets of snow, like old, kind men with aching backs and hefty coats. Like me.

Someone’s cleared an ice rink in the park and made it smooth enough to skate on. There’s a woman on it now. She’s wearing a long, red scarf and helping two little kids, two boys, stay up. They keep slipping and falling over each other. She’s determined, but each time she helps one up, the other tumbles, giggling like mad.

The jig is up. She looks at them with a stern face, but the boys spread like sea stars and wave their arms, carving snow angels in the ice. The woman laughs and it sounds like sleigh bells. I smile. My lips crack and I taste blood. I turn and walk away.

I take the bus, but don’t sit down, don’t hold on to the poles, drawing away from any other passengers. I remember what it was like before. Coming back from school; two stops on the metro blue line, then twenty minutes on the bus. I’d sweat in my winter coat, read my book and listen to music. Now, I stand rigid. Lurching forward and back with the bus, shuffling every time the driver presses on the gas or the brakes, my feet in a constant dance.

I get off at my stop and go to work. I put on my mask, my gloves, my glasses. Anything to distance myself even more. Anything to make the customer feel safe. Anything to convince them I won’t get them sick, kill them, kill their loved ones. This is the only time I get out of the house, the only way I get the social contact I crave by chatting with customers as I scan and pack their goods. Would you like a plastic bag? They’re 10 cents. I hear gossip from my coworkers and remember what it was like to keep secrets. Do you have the points card? Sometimes my supervisor lets me stock shelves. And how will you be paying? The music is terrible. Thankyouhaveagoodday.

I walk up a couple blocks to a building I know well. Familiar faces greet me at the door. I like them. There’s no pity in their eyes.

The man inside hands me a hot meal and I sit down, taking my time to chew every bite. Lentils, vegetables, rice fill my empty stomach. I can feel my fingers again.

I speak with the others. Sometimes one of us disappears or a new face joins and we’re not sure if we should celebrate or mourn.

They tell me Aaron died Saturday. We go quiet. I remember him. He had a great laugh and a sweet, toothless smile. I remember how he would stop mid-sentence to think about the word he wanted to use, not speaking until he had found the perfect one. Last week, I told him his French was impeccable. “Merci, merci”, he would reply with a dry chuckle. He used to be a French teacher.

I hear an angry discussion. Someone’s brought up the curfew. A story about the police tearing down someone’s tent, handing out tickets. A voice curses Legault, the big man in charge, “He doesn’t know what he’s saying. Him, he’s never been homeless.” “He lives in his mansion and gives us fees for not doing the same,” adds a peer. “Takes our money because we don’t have enough to get off the streets,” spits another.

A lone voice mentions the vaccine. They were able to get the shot, first of two. The mood shifts. Pats on the back, murmurs of congratulations. People smile at the thought of being next, of being safe.

I nod goodbye to the crowd and go across the street to the pharmacy.

I see him shuffle through the door.

He staggers, leaning on his grey, plastic cane, dressed in sagging pants and the same plaid shirt he wears every day. His clothes look heavy on his skin. You can see them pulling it down in folds.

All the cashiers know his name. Some of them like his soft demeanour, some see him and curse their bad luck. I for one can’t help but recognize my grandfather in his greying hair and doe eyes. He shouts sometimes when he’s frustrated and gets my name wrong, but I like the little jokes he makes and the colour of his knitted hat. Several times each day, he buys lottery tickets and bottles of juice, says yes to a plastic bag and a receipt. It’s our routine. Once everything’s over, he shuffles away and I use hand sanitizer. Way too much hand sanitizer. And then way too much Febreze.

As he stumbles out into the night, he chants “Merci, merci” in terrible French. Over and over. And it sounds like he’s begging for mercy.

Mia Kennedy is your friendly neighbourhood tea witch. She's in her first year of Arts and Culture, writes for The Plant magazine as well as SPACE magazine and is amazed every time she sees her words printed as published works. Mia dreams of publishing a novel, working in a bakery / hat shop / tearoom and meeting Laurie Anderson. Her head's in the clouds, but her feet are planted firmly on the ground.

Thank you to Mélodie Racine from The Open Door for her generosity in acting as sensitivity reader for this story.