the alleyway is damp, cold and smelly. concrete walls stand in the way of the sun. the remnants of what must've been the scarce belongings of a homeless person are scattered here and there. she shivers despite the nice late april weather. this place, this situation, announces no good.

she doesn’t understand why he asked her to wait there. he could've chosen any other place, a cafe, the park, even her apartment would've been fine. he had met her mother before, it wouldn’t have been a problem. thinking back, his nervous phone call, his chosen meeting place and the ambiguity concerning his whereabouts the last few days raises in her suspicions she tries hard to chase out of her mind.

it's been two years since he has gotten himself back on track. no more street corner deals, no  more orange jumpsuits. she was there throughout the whole process. with him, for him. even now despite the fear of what's to come, standing alone in this sad corner, she was determined to share with him whatever burden that had fallen upon his shoulders. 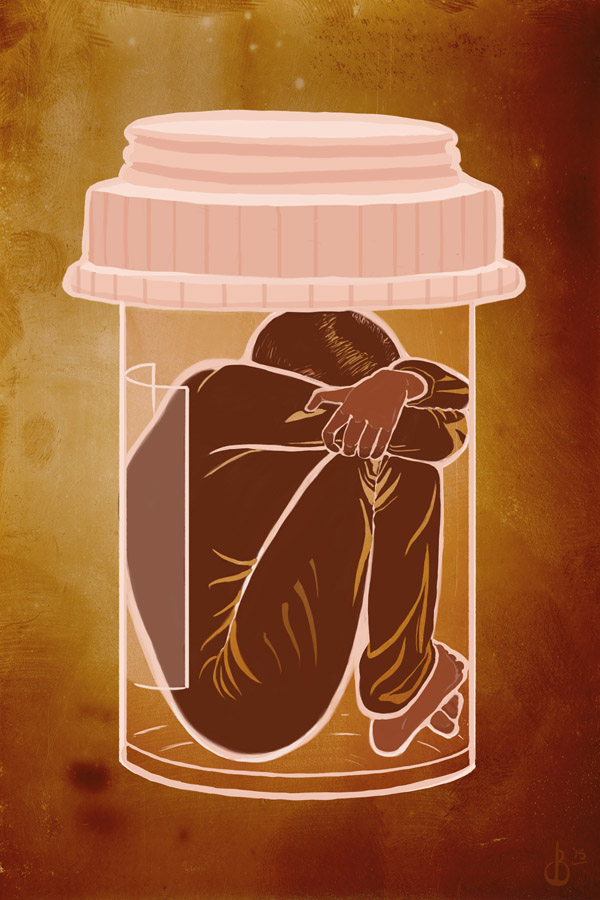 she met him three years ago. she vaguely knew of him before then, as they both grew up in the same neighborhood. he was tight with some of the boys she used to play ball with as a teenager. and later, she would pass by his corner on her way to and from work most evenings. it was on one such evening they first made contact. he was sitting on the curb, elbows on knees and slumped forward. she thought nothing of it, until she saw the large bloodstain on the side of his shirt.

half passed out from blood loss and his system too filled with codeine, he kept mumbling inaudible things. she got him to the hospital, and decided to stay until his people were notified. she spent the night, then headed home the next morning. two days went by and no one came. the emptiness of the room, and his obvious loneliness unsettled her.

on the block he always had people around him. yet here he was, lying on a hospital bed with no visitors. the sight of him in that situation broke her heart. she didn’t know him much but couldn’t imagine being alone through such an ordeal. so she made it her mission to visit him everyday. she stayed at his bedside, every evening after work, for two weeks. as his stab wound healed, they grew closer.

he wouldn’t speak of the events of that fateful night, and the first couple days wouldn’t speak at all. so she would sit, speak softly of whatever came to mind, or write and sometimes read aloud her pieces to him, until the persistently suspicious look in his eyes eased. with time he found comfort in her presence.

quick footsteps coming her way snap her back to the present. she is tense and apprehensive, until she sees him. but there is no time for relief. he looks worried. hugs her tight and asks, "remember the day i told you there will be times my past will come back to haunt me?". her heart sinks. she nods.

"i have to disappear. few years back i made myself enemies who were behind bars. they're out now, and people have been sent looking for me. you know how it is, i've been out of the game long enough for people not to think twice about me. i don't have the protection i had, and those who've been loyal to me in the past have too much to lose today by having my back, i can't put them in such situations."

so he has to leave the city, leave all he's ever known and loved behind and start anew. he knew he couldn't move forward being only a few streets away from his old life. and now things are more urgent. his life is threatened. he was never among the biggest fish in this ocean of drugs but he loved money and never hesitated to venture into rival turf. it was years ago but those concerned don't forget and want vengeance.

he can't sleep. the thought of the tough times ahead and the critical decisions that need to be made keep him awake. he wants her to be with him, but he doesn't want to put her in danger's way. he tries weighing his options but his heart has fallen deep into the pit of his stomach and his mind can’t focus. he will let her decide for herself.

sitting in the greyhound she can’t figure out whether she did the right thing or not. since the beginning it felt right. but now in the back of her mind she was questioning herself. wondering whether leaving everything, all to start over again in a new city, was a wise decision. it was them against the world.

she had convinced herself she could easily transfer to another college. she could apply for a new job, could visit her mom every once in awhile. but the fact that she up and left so fast, that in a couple of days she managed to make up her mind and permanently pack her bags made her feel like her actions were rash and that she was miscalculating this whole situation.

but she doesn’t see herself doing otherwise. she only wishes she could’ve had more time to think this through, to plan things better and feel more at peace. but time is not on their side and she knows it. his life is on the line and he is doing what he had to in order to save himself and move forward. she made a vow to be by his side when things were difficult. she knows he needs her much more than he actually shows it.

he left before she did. he managed to get a job through his old boss. one phone call and that was it. finding a place to live was easy as well: his girl’s cousin lived in the city and was leaving the country. she spoke to the landowner who agreed to rent them the apartment as soon as her lease was over. he still can’t believe how blessed he had been.

as soon as he told her he had to leave she said she would go with him. but later he could see in her eyes that between her heart and reason an internal battle was being fought. so it was his job to make things better and show her they could make it through. make her understand, not only feel, that she made the right decision. he was grateful to her, more than he could ever show her, for staying by side.

knowing that her bus will arrive in an hour, he sets out to buy groceries and cook her something nice. what he doesn’t know is that at that precise moment, an exhausted trucker gets behind his 18-wheeler. his destination is only three exits away and he’s convinced he can finish his trip safely.

but he can’t. his body tricks him. microsleep. when he opens his eyes it’s too late. he’s already lost control of the truck, cannot steer it back onto its lane. slowly he feels the transfer of weight, hears the wheels screeching. the container is out of balance and falls on its right side.

the last thing he sees is a greyhound bus.

A S.P.A.C.E. contributor for the past 3 semesters, Sumaya is currently finishing her last semester at Dawson. She's planning on studying International Development and eventually working either in educational systems or food security and development abroad. She loves literature, reads constantly and writes on a regular basis.

Jacquiline Bush is a Montreal-born illustrator who loves to work in a variety of mediums, from acrylics to Photoshop, often mixing traditional and digital media. She experiments constantly, approaching each new project with fresh eyes and rarely using the same creative process twice.

She is an avid reader who never tires of becoming absorbed in the fictional worlds of her favourite authors. One of her earliest influences was Quentin Blake's zany and energetic illustration alongside Roald Dahl's beautiful and fantastical words. She hopes to see even a modicum of their success in her own illustration and design career.