Anti-Sealers, Angry Inuk: An Examination of Anti-Sealing’s Effects on Inuit

Taking an informed stance on any issue requires considering it from multiple angles. Everyone interprets the world and its many issues differently. We call these interpretations perspectives. The 2016 film, Angry Inuk, by Alethea Arnaquq-Baril, tells the story of the widely protested Canadian seal hunt from the lesser known perspective of the very people affected – the Inuit. This perspective is essential to understanding the issue because, as this paper will demonstrate, the anti-sealing movement does not acknowledge its devastating effects on Inuit livelihood. The anti-sealing movement’s exemption of Inuit from its seal product bans is not only unhelpful, but harmful to Inuit, because it allows for the promotion of a false image of hunted seals, strengthens the misrepresentation of Inuit, and is used as an excuse to avoid discussion with them. 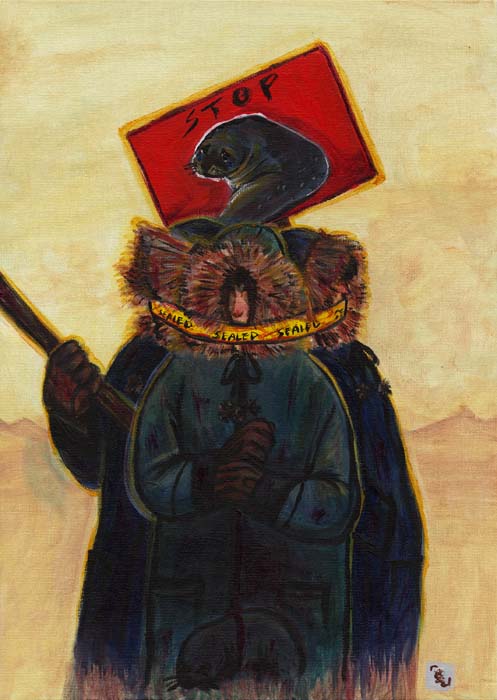 Exempting Inuit from seal product bans allows for the promotion of a false image of hunted seals. The anti-sealing movement uses white-coat seals as the face of its campaign to appeal to the public’s emotions. This is dishonest because the Inuit of Nunavut do not hunt white-coat seals, as pressure from the anti-sealing movement itself made hunting Harp seals before they shed their white skin illegal in Canada. The film, Angry Inuk, reveals that Paul Watson, a marine wildlife conservation and environmental activist, confirmed in a 1978 interview that the seal is “very easy to exploit as an image” and attributed baby seals’ crying in images used by the movement to “the salt tears [keeping] their eyes from freezing” (Arnaquq-Baril, 2016). Even after accusing it of targeting the seal hunt for its high profitability, Watson rejoined the anti-sealing movement. This contributes to the harm done to Inuit through their exemption from product bans, as it successfully discourages the public from purchasing legally sold seal products because an association has been made between such products and the abuse of beautiful defenseless animals.

Canadian seals are not the only group the anti-sealing movement misrepresents. By protesting the Canadian “commercial seal hunt” and excluding Inuit from its market – of which they are very much a part – organizations, such as the Humane Society of the United States, are able to claim that banning seal products does not affect Nunavut’s Inuit, which is untrue (Humane Society, 2015, p. 1). These organizations make it seem as though the Inuit hunt seals only to “fill the freezers of [their] community” (Arnaquq-Baril, 2016). While this is a significant part of their hunt, it does not generate profit and allow them to survive in a region where seven out of ten children go to school hungry (Arnaquq-Baril, 2016). Seal skin sales have been the driving force of the Inuit economy for over 100 years (Arnaquq-Baril, 2016). Their market suffered a crash in 1983 when Greenpeace’s efforts led to the European Union’s ban on white-coat seal products (Arnaquq-Baril, 2016). The market never fully recovered from this because the ban ruined the reputation of all seal skins and prices fell from $100 to $10 a pelt. To make matters worse, in 2009, the EU banned the sale of all seal products in its 27 member states (Arnaquq-Baril, 2016). The mischaracterization of Inuit as a people who do not need to participate in the global market through their “exemption” from bans is the sole cause of the break in their economic cycle. They hunt to sell seal products and use the money earned to buy gas to go hunt again. If it weren’t for the Canadian government’s vehement support, collection and subsequent sale of Inuit’s products on the global market, most would not make enough money to survive. Denying Inuit the means to survive on their own land, off their own practices infringes upon their human agency, which the textbook defines as human beings’ ability to exercise measurable control over their lives (Lavenda, Schultz, & Zutter, 2018, p. 29). This is especially upsetting because their impoverishment has been a huge source of revenue for organizations, such as the HSUS, which has made over $2 million off this initiative (Arnaquq-Baril, 2016).

Building on the misrepresentation of Inuit, it has become clear that the anti-sealing movement’s reason for avoiding discussions with them is the fear of being faced with questions it cannot answer. The movement’s representatives have systematically avoided contact with the Inuit. On March 13th, 2013 the International Fund for Animal Welfare (IFAW) did not attend its own protest in Toronto after hearing that Alethea Arnaquq-Baril and a group of Inuit students had organized a counter protest (Arnaquq-Baril, 2016). During the EU’s 2009 ban, not once were the Inuit consulted, nor was its effect on their livelihood acknowledged. Instead, a statement was included that the ban was beneficial to Inuit (Arnaquq-Baril, 2016). This allows the EU to continue pretending that its ban does not affect them. By passing a ban on Inuit’s primary source of income due to its treatment of animals, the EU shows how far removed it is from the realities of living in a region with limited resources. By deeming seal hunting for survival inhumane and the systematic and mass slaughter of farm animals in Europe acceptable, the EU takes on an ethnocentric view of the issue. Ethnocentrism can be defined as “The opinion that one’s own way of life is natural and correct, and, indeed, the only true way of being fully human” (Lavenda, Schultz, & Zutter, 2018, p. 33). Perhaps in an overdue attempt to absolve itself of any wrongdoing, Greenpeace publicly apologized to Inuit in 2014 for the bans’ effects on their lives (Arnaquq-Baril, 2015, p. 1). Though this is a step in the right direction, there continues to be a lack of communication between anti-sealers and the Inuit, meaning that the bans from which they are not truly exempt continue to negatively impact life for them in 2018.

As demonstrated, by promoting a false image of hunted seals, anti-sealing groups mislead the public into thinking the Inuit hunt white-coats, drastically reducing their skin sales. By misrepresenting them as a people who are not involved in the global market, anti-sealers devastate the Inuit economy. By calculatedly avoiding discussion with Inuit, the movement largely refuses to acknowledge its catastrophic and lasting effects on them. This all happens under the guise of an exemption of Inuit from seal product bans, which has the opposite effect it claims to seek – the detriment of Inuit livelihood. With growing social media platforms, lesser known perspectives may emerge to correct distorted truths. In the case of the Canadian seal hunt, outlets such as Instagram have given the Inuit of Nunavut direct contact with a curious public and louder voices that now chant in unison: “hunt seal, eat seal, wear seal”.

The Humane Society of the United States. (2015, February 9). About the Canadian Seal Hunt. Retrieved from [url=http://www.humanesociety.org/issues/seal_hunt/facts/about_seal_hunt.html?credit=web_id86139308#Which_seals_are_targeted_by_Canadas_seal]http://www.humanesociety.org/issues/seal_hunt/facts/about_seal_hunt.html?credit=web_id86139308#Which_seals_are_targeted_by_Canadas_seal[/url]

Ayelet Ami is a second-year Dawson student in the Law, Society and Justice profile passionate about social advocacy and the law. She is an active member of the Dawson Debate Union (DDU) and Model United Nations (DCMUN).