Every time I pass Charlie lying on his side, I stop to see if he’s breathing. When I’m certain his chest rises and falls, I keep walking. Whether I’m going to my room with a bag of fresh laundry or rushing out the door to catch my bus, I check. And every time, there is a split second when I believe he’s finally died.

He hasn’t been doing well. For the past few days, he hasn't lifted his head when I call his name. From dusk to dawn, he lies on the big pillow bed in the living room. My mom wrapped it with a Donald Duck towel, the one I used at the beach when I was little. 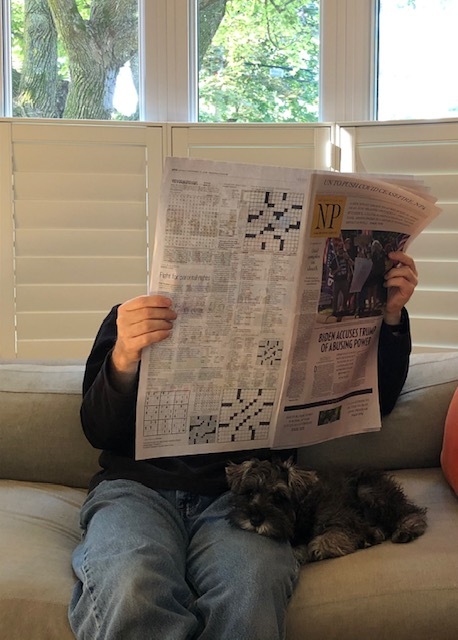 My mother’s losing her mind. She’s always had a terrible memory. We tease her about it. She begins a sentence and trails off, never getting to the final word. “Can you get me the…” “I can’t find my…” I’ve acquired a sixth sense to cope with it. I intuitively know what she wants and finish her sentences before she realizes that she’s trailed off. Almost every time, I guess right.

It’s gotten worse now. She presses the button on our coffee maker, but doesn’t put a mug beneath the spout, leaving a puddle of fresh coffee on the counter. Or she turns the oven on to roast some veggies but wanders off and leaves it heating the house for hours. And every time I call her back, away from her wandering thoughts, she smiles and laughs.

Charlie can’t stand on his own. Three times a day my mom spoons organic chicken and low-cholesterol kibble into her palm, lowers it to his face, and watches him eat. Afterwards, my dad pulls on his jacket, his boots, his hat, and carries him into the backyard. I see him hold Charlie with gloved hands through my bedroom window. Charlie shakes in the cold. My dad watches the dog relieve himself. Then, he brings him back inside.

My mom had me at forty. She’s a brilliant woman. A trailblazer in her field, she’s highly regarded by her peers and has been published in academic newspapers and magazines. Niche scientific communities regard her as a star, a leading woman. To me, she’s Mom. I worry something bad will happen if I leave her for too long. Instead of heating an empty oven, she might forget something on the hot stove. Who would save her then?

My dad turned sixty in September. Milestones are stealthy. Big birthdays creep, stalking you for months until the day comes and now my father is eligible for senior discounts. My dad, who makes bad jokes and cries at commercials, is sixty. He’s the youngest in the family. The man-child we tease and adore. Does sixty mean he only has twenty years left? Do I only have twenty years left of tight hugs from trunk arms? Of running down to the basement when I feel like my life is falling apart so he can piece it back together?

Charlie is nine now. He’s palm-fed and carried out to shit, but still isn’t getting better. It’s his heart. The trouble started with a murmur, a minor irregularity in his heartbeat. Then, the vets found all this fat in his blood. My mom’s grated parmesan over his dish bowl for years, feeding him pizza crusts under the table. She loves hard.

I don’t remember the medical term. Was it “syncope”? Fancy word for fainting. When he gets excited, his heart beats fluid into his lungs. Then, he falls over. His limbs go straight and hard. My mom told me that sometimes he loses control of his bowels. That’s the yelping I hear late at night. My parents clean up instead of sleeping, but I can still smell it in the morning. And see it on my Donald Duck towel.

I’m more concerned for my parents than Charlie. He’s a good dog, but we got him when I was eight and I’ve never been in charge of him. I begged them for him. For years, I begged on Christmas, on birthdays, and I regret it.

Now, when he looks the worst he ever has, I can’t seem to care. I feel bad about it, of course, but my focus is elsewhere. I see my mom spending half an hour palm-feeding, mourning pre-maturely, her back curved over him like a weeping willow and I worry. I see my dad putting on his mittens and boots five times a day to take this dog out in a snowstorm and I worry. I see them reading the morning newspaper and drinking coffee, the bags under their eyes deepening and I worry.

Parents are praised for putting their needs aside to take care of their children. My parents won’t be rewarded for the late nights or the Sundays making dog food, the house smelling like boiled chicken. They’ll only get another grave in the pet cemetery. Another worn-out collar.

My parents told me that every time he faints, his heart grows. Getting a little bit bigger with every yelp and fall, it makes the episodes longer, more frequent and more painful. I imagine skin straining over a muscle filled with too much blood. It splits and fissures, cracking like a ripe watermelon. I want it to stop.

I heard my mom saying the same to my father. They shared conspiratorial glances before looking down at the dog, worried he understood. These days, Charlie gets more attention from my parents than I do.

My dad called my mom crazy once. We were on the way back from a ski mountain. My dad and I were driving behind my mom’s car. It was a busy street, cars were racing by, when she slowed to a stop. She had misunderstood a street sign, but the cars behind her didn’t know that. Piled up, they honked at her. My dad called her crazy for it. He was right to.

I want my parents back. I want them to sleep through the night. I want the towels to smell fresh, folded in the cupboard. I want my Mom to have her Sundays back and my father to take me hiking.

I pass him in the living room and stop to watch. His fur-covered chest rises and falls ever so slightly. My eyes become x-rays. I see the pink flesh bomb suspended in space, pumping within his fragile ribcage. Growing, growing. I watch it plump up, engorged and warm, as it nears his tiny sternum. I listen and wait for a pop.

Mia Kennedy is your friendly neighbourhood tea witch. She's in her first year of Arts and Culture, writes for The Plant magazine as well as SPACE magazine and is amazed every time she sees her words printed as published works. Mia dreams of publishing a novel, working in a bakery / hat shop / tearoom and meeting Laurie Anderson. Her head's in the clouds, but her feet are planted firmly on the ground.