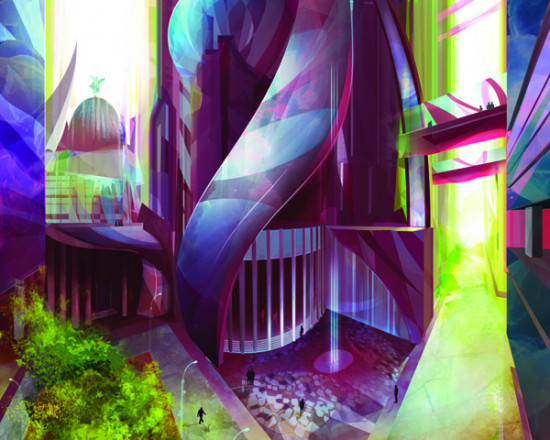 The live exhibition runs in the Warren G. Flowers Art Gallery at Dawson until April 19, 2012 from 9 am to 9 pm weekdays.

The theme of the present exhibition takes its inspiration from a little known event that took place at Dawson College in 1972. In October of that year, the college invited a special guest speaker named Buckminster Fulleri. Fuller had become a well-known name in Montreal because of the geodesic dome he designed for the American pavilion at Expo ‘67. By the time of his visit, the dome was already a landmark symbolizing the arrival of Montreal on the world stage. Fuller was also recognized as one of the leading spokespersons for the then burgeoning environmental movement. The catchphrase “doing more with less,” which had become synonymous with his name and his ideasii, was adopted for the title of an exhibition held at Dawson in celebration of his visit. The current exhibition, Transforming Futures, pays a modest tribute to the historically defining moment of Fuller’s visit to Dawson College.

The week of Fuller’s visit at Dawson coincided with an event that became an iconic moment in Canada’s national memory in what came to be known as the ‘summit’ hockey series between Canada and the Soviet Union. In fact, the exhibition and activities were being organized as staff and students alike were reveling in the euphoria of Henderson’s tie breaking goal. But the early 1970s in Montreal is also remembered as a turbulent era that witnessed social and political confrontations and collective protests in which the universities and colleges played a key role. The silent revolution in Quebec had generated broad changes, not the least being the creation of the CEGEP system in 1967, and the opening of Dawson College two years later. At the time of Fuller’s visit Dawson College was still a new idea, so new that many viewed it as an unproven experiment. Forty years and two generations later, the reason Dawson first came into existence is now largely unknown to many. In the context of the present exhibition, however, the ‘new idea’ that was Dawson College is essential for understanding why Buckminster Fuller found himself addressing a few hundred students and staff on the nature of geometry, the future, change, and hope.

Fuller’s visit had been engineered by a group of teachers who were part of a network of like-minded colleagues in Montreal and beyond. Like many of the new teachers that had arrived to fill the teaching positions produced by the recently formed CEGEP system, they were idealistic and marked by the spirit of the times. In the audience that day were students and staff from other schools, including McGill University and École Polytechnique de Montréal, with whom events had been co-sponsored. Models of geodesic domes were rising in schools throughout the city, from McGill’s campus grounds to the gymnasium of Miss Edgar’s and Miss Cramp’s School for girls.iii Dawson too had its own 3-D model of a geodesic structure installed in the college library (at the time located on the Viger campus). The thirty-foot structure was built by Craig Tandy, who named it Great Stellated Dodecahedron. It was the centerpiece of an exhibitioniv that included didactic panels on green design, a mural by Francis Capriani, and a maquette of Franklin Thomas’s spiraling Universal City.v The weeklong exhibition, L’Austerité Joyeuse, Doing More with Less, introduced Fuller’s concepts to Dawson students in a way that was both tangible and engaging. ‘Fuller Week’ was a festival of sorts that put into action Fuller’s belief that innovation relied on collaborative and interdisciplinary approach that valued creativity, experimentation, and whole-systems thinking. There was no better example of this thinking than his concept of the World Game, a problem-solving challenge in which global issues were approached from a ‘doing more with less’ perspective. Playing World Game was one of a number of activities that week at Dawson.

Fuller’s visit was marked by two special ceremonies.vi One was the awarding of a diploma to Fuller by Dawson’s first Director General Paul Gallagher, making Fuller the college’s first honourary student. Upon receiving the parchment, Fuller replied,—“I cannot conceive of anything more beautiful happening. Many of you know how much I care about what you have done in making me a student… I am a student on my own initiative and I hope I will always be. I think we all are, but to be allowed to be a student with you is such a joy.”vii Fuller’s words reveal his esteem for students and for the learning environment as a whole, which he saw as a laboratory for original thinking. His enthusiasm and respect for the power of young people is no more clearly expressed than in the following words from that day —“I admire you young people because your natural reflexes are not as powerfully conditioned as are those of your parents. You think and react honestly… and that creates problems for the bureaucracy.”viii

The second ceremony that day was the presentation of a newly translated French language version of Fuller’s now famous Operating Manual for Spaceship Earth.ix The book had been translated by Serge Laliberté who, while handing it to Fuller, explained that he had worked on it “so that French-speaking people can understand your work and your ideas,” at which the audience broke out in loud applause and boisterous cheers. In the volatile politics of the time, Fuller’s visit seemed to generate a positive, ‘yes we can’ attitude about the future in an audience that was living through an important historical transition wherein the nature of collective identity and global citizenship were being reassessed. This sense of forward momentum affected many of the participants, including Paul Gallagher, who announced that the exploration of Fuller’s ideas would not be limited to a single week but would extend throughout the year and find expression in a number of college wide activities. The passion of the moment is evident in Gallagher’s concluding remarks which share in Fuller’s ‘big picture’ approach to life when he said that he hoped the ideas generated that week “would pervade our lives beyond the current year as associates of Dawson College, and become greater and greater as time goes on”.x

Time has indeed moved on. Looking back over forty years the question remains as to whether the philosophy of ‘doing more with less’ became part of the legacy that earlier generation of Dawson College bequest to the following generations of teachers and students. Transforming Futures does not attempt to answer this question but instead offers a window onto the imagination of some of our current students and staff who were asked to reflect on the city of the future. Drawing from a variety of programs and departments, the exhibition offers an interdisciplinary view of the city of tomorrow and the life we envision for our communities and ourselves. To paraphrase the words of one of the key participants of ‘Fuller Week’, teacher Henry Strub, “it’s a small but heroic effort.”xi Poetic, witty, thoughtful, the images and objects on display reveal the future as a place of unbound invention and extraordinary possibility.

All sounds for these projects were found and appropriated through open source online sound banks. They were edited, manipulated and mixed by student artists using computer software.

Soundscape 1 ‘Wake Up’ by : Julien Novak, Ellie Young and Michelle Lee
This soundscape aims to immerse listeners in the future morning activities of daily living. The world has changed to include easier breakfast preparations and programmed appliances. A character wakes up to smooth mechanical transitions and vocal digital alarm clock. A remote control window opens to reveal chirping birds in the distance. It’s a beautiful futuristic day, and it has never been easier to get up and get ready to go.

Soundscape 2 ‘A Work Plan’ by : Justin Di Vitto, Tabitha Hartropp and Pietro Barbaguelatta-Palma
Focusing on the office space of the future, this soundscape follows Mr.Smith in his endeavors at his work place. Following his subjective point of view, a listener will encounter many unusual sounds while moving towards a secured office space. Distant chatter and the sipping of coffee may be the few audible components that resemble the world we know today. Everything else, only the future can tell.

Soundscape 3 ‘Transportation Station’ by: Darya Arenzon and Virginie Lahaie
More abstract in nature, this project depicts the sounds that future public transit users might hear while waiting for their next speedy evacuation. Not unlike an out- of-body experience, this station has the ability to transport people to their destinations quickly and efficiently using vacuum technology.

Abstract ambiance ‘Loop Interludes’ by Julien Novak:
All abstract ambient sound was developed and created as a means of weaving the soundscapes described above together for a looped installation. Traces of the above soundscapes can be found mixed into this skillfully developed piece.

The video documentary (included as a DVD with this publication) asks the following questions to a range of individuals:

How do you see the future?

What do you expect from it?

If you wake up tomorrow and it was the future, what kind of changes would you see in the world?

What changes do you expect in your routine?

The human element is the focus of this project. The interviewees are regular everyday people. Their responses to the above questions are spread throughout the short film as a form of voice-over narration as well as people talking on camera.

The video includes a voice-over of Mr. Fuller’s speech when he visited Dawson College back in the 70s and also some footage of modern architecture and inventions.