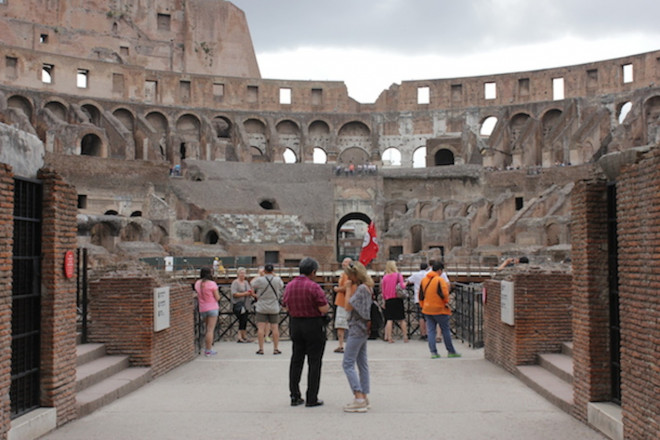 Transculturation: The Reevaluation of Tourism

TRANSCULTURATION: Cultural change induced by the introduction of elements of a foreign culture.

TRANSVALUATION: Evaluation by a new standard or principle, especially one that varies from conventional standards.

This summer, I spent a month in Florence to study Italian. Although Florence eventually started to feel like home, I remained a tourist in one of the most touristic countries in the world. This became even more apparent when I spent a day in Rome and Venice, away from my "home" in Florence.

Throughout my trip, I photographed hundreds of tourists as well as locals, all of whom were in the same physical space as I yet most probably in a different "mental space." Despite our cultural differences as individuals from all around the world, I began to question the universal norms of tourism, such as posing for an innumerable amount of photos or capturing every angle of a foreign country's landmarks.

Consequently, tourism began to fascinate me. I studied my own behavior as well as that of other tourists more closely. Being surrounded by thousands of visitors suddenly made me feel like I was in this transitional or “in-between” world; everyone was similar to me, for we were all experiencing a place that was foreign—yet in the end, we were all strangers who faced separate realities. For the time being, we coexisted, and we inevitably shaped each other’s environments as much as the Italian landscape that we had come to discover.

As I continued to reflect on my time in Italy, I realized that I had experienced the lifestyle of a tourist rather than that of an Italian. I befriended tourists, lived with tourists, studied with tourists. I was addressed as a tourist in restaurants, malls, and markets. My time in Italy was definite. Therefore, as attached to Florence as I was and always will be, I experienced Italy as a temporary guest, surrounded by thousands of my own kind.

I am passionate about photography, and I hoped to capture a fresh and thought-provoking series of images while travelling to Europe. Italy is a place filled with photographers, however, and foreigners snap countless photos of the country’s beauty on a daily basis. I wanted to find more than just souvenirs of a given place at a given time. Although I was originally anticipating shooting landscapes, I became more interested in shooting portraits––or more precisely, portraits of strangers, including locals but most often tourists. Usually, I rushed to take a photo of someone without them noticing, but the subject occasionally looked straight into my lens, paused, and continued on with what they were doing.

My month in Florence was without question the most enriching experience of my life. The way of life in Italy transformed my perspective, and observing the people there made me question my own behavior as a Canadian. Although I do not know where my next destination will be, I look forward to once again joining the touristic culture that I have just begun to discover.

Nancy is a Cinema/Video/Communications student with a passion for still and moving images. She is inspired by a variety of disciplines and wishes to explore both digital and fine arts as well as philosophy within her future projects.