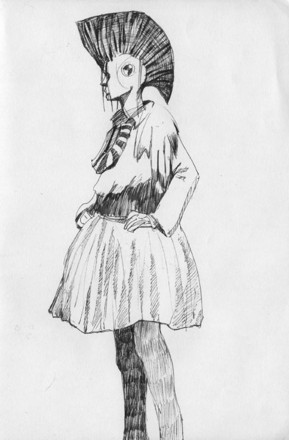 The Figure – Real to Imagined

The sketchbook is a place where an artist can explore without the constraints of commercial work.

This particular book began with sketches inspired by the works of Jean Paul Gaultier. Rough outlines were recorded on location at the MMFA and were later completed from imagination. Ideas within are thus born out of outside influences, sum of all experiences. Other sketches began as formless scribbles and shapes, which the mind is hard-wired to decipher. Each page grows from each other, forming a cohesive stream of images.

Pen and marker were chosen as prime mediums for their immediacy and graphic nature.

Xin Ran Liu, is a 3rd year Illustration & Design student at Dawson College. Xin draws from the live model on a regular basis, and is also able to create remarkable images from his imagination.