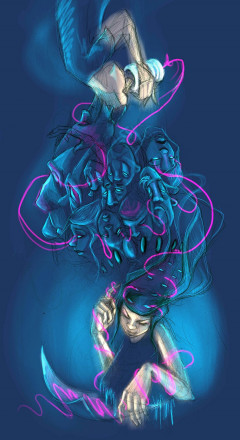 This project is a variant on the game of "Broken Telephone", where a chain of people pass information along verbally from one to another, often ending with a vast difference between what was initially expressed relative to what was finally expressed. With Broken Tele/vision, the information alternates between image and word. Each participant expressed what they perceived the previous contributor to have expressed. An artist created a quick sketch, a writer briefly described what the sketch represents, another artist sketched what that text portrays, another writer articulated what the second sketch reveals, and so on. Each participant only saw one stage of the chain, and the content was visualized from image to word and back again by a large group of participants.

The alternating artworks and texts were reproduced and attached end to end to produce a short video which was displayed in the VISION(S) exhibition and in the accompanying catalogue.

This project is an experiment in how people interpret and visualize information. What (if anything) will be retained at the end? The project was conceived by Amanda Beattie (Dept. of Fine Arts) and coordinated by Frank Mulvey (S.P.A.C.E.)