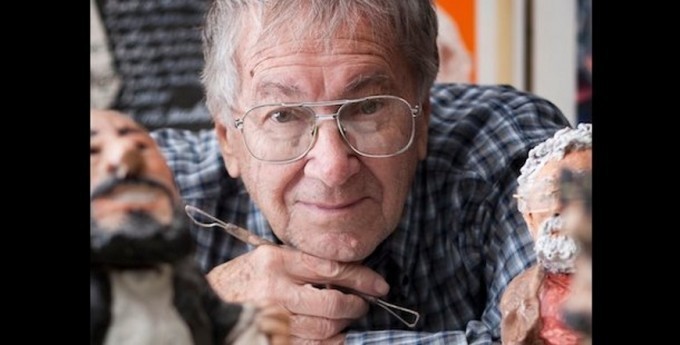 On February 11th, illustrator Stan Roach came to the Dawson Theatre to present his artwork, to do a live drawing demonstration, to answer questions about his work and to interact with students.

If you visit Stan's virtual exhibit by clicking on the link above, check out his artwork by clicking the "View Exhibit" button.  Below, there are also photos from the event to check out, supplied courtesy of Geoff Carley and Ed Kachaami, and a couple of still photos from the drawing demo and from the materials demo.  What a fascinating glimpse into the world of this master caricaturist! 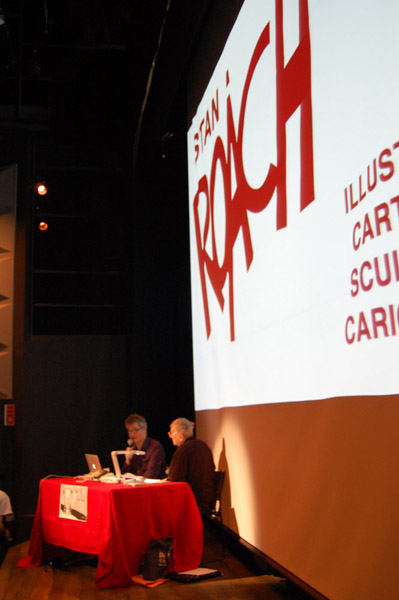 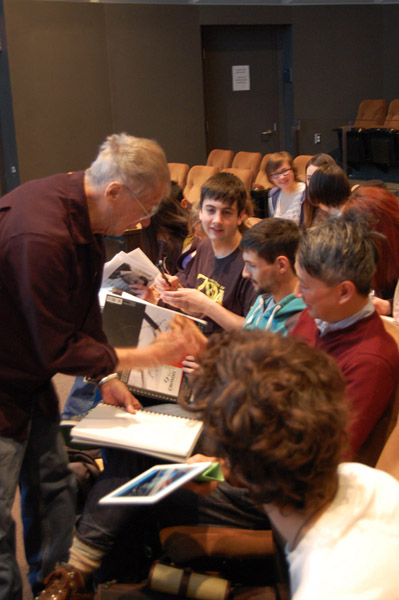 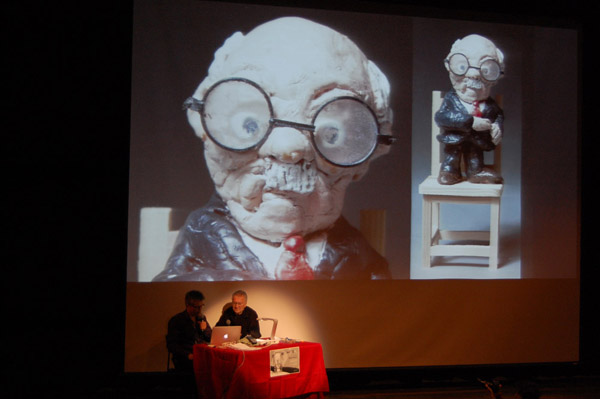 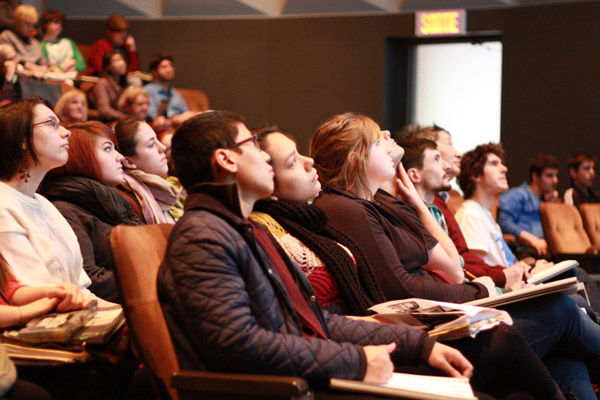 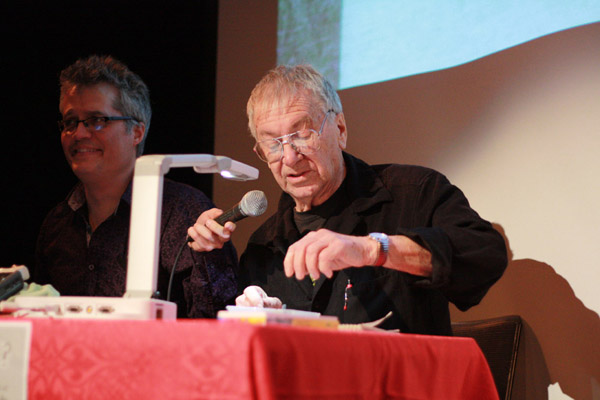 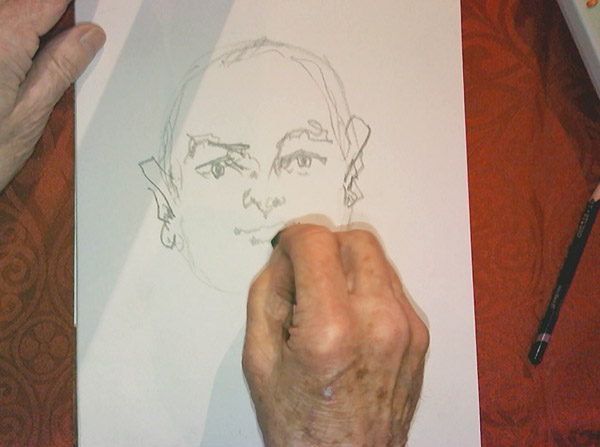 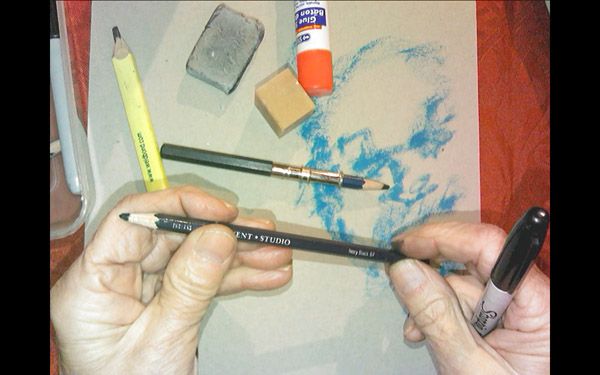 Born in New Waterford, Cape Breton, Stan Roach studied at Mount Carmel School. There, the Sisters of Charity encouraged his love of drawing by arming him with coloured chalk and sending him from one classroom to the next to draw on the blackboards.

Stan began his career with the Cape Breton Post in the early 1950’s, where he drew editorial and sports cartoons at the age of 15, as well as working in the engraving department. After a few years, Stan hungered for a formal art training, so he packed his bags for Toronto and studied at the Ontario College of Art. Following his studies, he worked as a freelance illustrator for a range of publications, including the Globe and Mail, the Hamilton Spectator and the Toronto Star.
In the 1960s Stan moved to Montreal and worked freelance for the Montreal Gazette and as an art director for Zellers. His editorial cartoons have found their way into the pages of the Montreal Star, The Sunday Express, La Tribune, The Chronicle (West Island, East End, and Hudson), The Monitor, and a host of Canadian and European magazines.

In 1981, Stan joined the Illustration & Design Faculty at Dawson College. For three decades, Stan brought his love of drawing, his passion for illustration, his technical expertise, and his oddball sense of humour into the classroom for younger generations of artists to experience. Stan Roach has been recognized for outstanding editorial cartoon work with numerous prizes and awards. At Expo 67 he won an International Caricature Award. In 1978 Stan won first prize at the Ile Notre-Dame humour pavilion for his caricature work. In 1997, he received the QNCA Newspaper Award for best editorial cartoon. On a national level, Stan has been honoured with the Hanover Post Trophy Award, and perhaps the most prestigious of all: the 1999 Duncan MacPherson Award.

Stan’s editorial cartoons poke fun at a range of political figures, policies, and personalities from the municipal, provincial, federal, and international arenas. Throughout his career, he has always responded passionately, and often irreverently, to the issues of the day. Some politicians have enjoyed Stan’s comical interpretations of them, even requesting from him the original drawings in order to bless their office walls. Others have not been particularly pleased. In the National Assembly in Quebec City, Claude Laurin denounced a representation of himself as a bottle of Extra Strength Tylenol. His remarks were aired on CBC television. It was around the time when the analgesic had been pulled from the shelves after deaths resulting from tampering with the capsules. Laurin was quoted as saying that he “can’t accept this kind of expression of ideas. After all, we can discuss ideas in a very rational and civilized way.” Stan’s reaction was that it was “a good feeling to know we’re going beyond the Anglophone readership (of the Sunday Express)”, and that he was glad that Laurin was “looking and reading. I hope he takes it with a sense of humour.”

Stan has been asked why he lambastes certain politicians. His reply: “I normally don’t do it to comment on the sacred cows themselves, but on what they represent”. It is the policies and actions of political figures that Stan targets, not the individuals. To spark ideas for his work, Stan reads many newspaper and magazine articles, and listens to call-in radio programs. He is most proud of the work that he does for weekly publications. He explains that drawing cartoons for weekly newspapers is more difficult than contributing to a daily publication. The artwork has to be submitted on a Friday in order to go into print the following Tuesday, and the subject has to remain interesting and relevant for a week or more. The challenge of daily publications is that they require him to be consistently quick-witted and inventive.

A warm thanks to