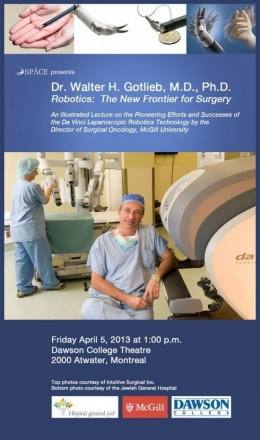 Robotics: The New Frontier for Surgery

To see a video edited from portions of this presentation, click here.

Robotic surgery, originally developed by NASA to perform surgeries in space stations, has found its way into the civilian operating room. It is revolutionizing access to minimally invasive surgery and patient outcome thanks to improved three dimensional high definition immersion vision and intuitive surgical dexterity with more degrees of freedom compared to the human hand.

Since its introduction at the Jewish General hospital five years ago, the results indicate major benefits of this surgical approach, with lower peri-operative complications, reduced need for pain medications, shorter hospital stay and lower real average hospital costs, as compared to traditional open surgery. In addition, the team was able to increase the proportion of patients benefiting from a minimally invasive surgical approach for certain cancers from 17%, prior to the introduction of the Da Vinci Robot, to over 95% within 2 years.

As our team began seeing the benefits of robotic surgery to patients from a clinical outcomes perspective and to the health care system from a resource utilization and cost perspective, we were emboldened to make the case for its use to patients in Quebec (the McGill University Health Centre, Université de Montréal, Université de Laval), across Canada (The University of Ottawa, St. Michael’s Hospital in Toronto, University of Alberta and Vancouver General Hospital) and internationally (China, India, Israel).

The future of robotic-assisted surgery will evolve with the further development of the  computer interface present between the surgeon and the patient, that will allow to integrate radiological images obtained prior to surgery into the surgical screen , and by exploiting real time digital analysis of the surgical field, helping the surgeon to identify structures based on differences in color or movement. Pre-operative training on computerized simulation of the surgery and added feedback loops are being developed to further increase safety ultimately benefiting the patients."

Following two years at the National Institutes of Health, where he obtained the National Cancer Institute Award of Outstanding Performance, he performed a three year fellowship in Gyn-onc at UCLA. He was then recruited by the by Tel Aviv University, Tel Hashomer Hospital, where he co-founded and built up the Department of Gynaecologic-Oncology from 1994 to 2003.

In 2003, he was recruited by McGill University. He obtained license to practice in Europe, Israel, California, and Canada. In addition to his clinical responsibilities, he is involved in scientific research in ovarian cancer as a Project Director in the Lady Davis Research Institute and Senior Scientist of the Montreal Center for Experimental Therapeutics and Cancer. His efforts focus on translational research and novel therapeutic tools for ovarian cancer, and he has been the pioneer and driven “robotic” surgery in gynaecologic cancer in Canada. He has lectured around the world, and has proctored robotic surgery in Canada, China, India, and Israel.

Photo of Dr. Gotlieb: courtesy of the Jewish General Hospital

S.P.A.C.E. is very grateful to Maureen McIntyre of the Fine Arts Department for her initiative and commitment to this project.