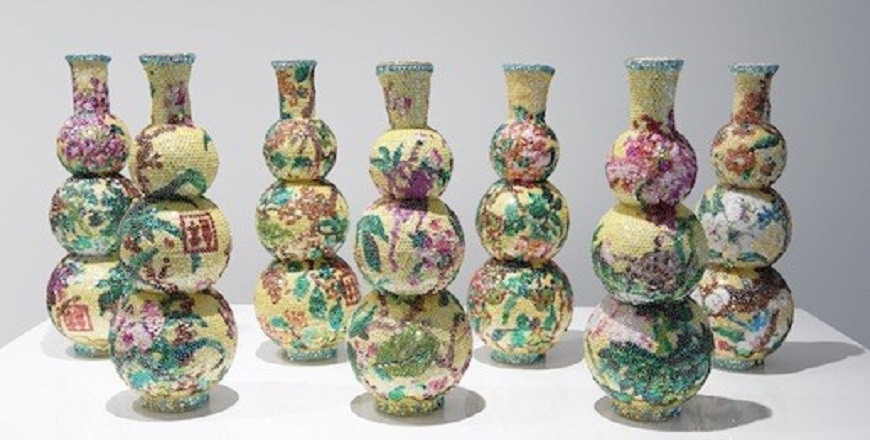 Karen Tam is a curator and an interdisciplinary artist who is interested in exploring ideas around authenticity, history, narrative, and the Chinese diaspora in her sculptural and installation works. A Dawson alumnus, Karen’s career has spanned over a twenty-year period and taken her around the world.

This talk is a continuation of a series of events linked to the SPACE theme this year: Intersections. Past events have included a visit to the Arts of One World exhibition at The Montreal Museum of Fine Arts, where Karen’s series, Castiglione's Insect Mimics, 2014 – 2017, is exhibited. As part of her talk, she will be touching on the intersections that she faces in her work.

Karen Tam holds a MFA in Sculpture (School of the Art Institute of Chicago) and a PhD in Cultural Studies (Goldsmiths, University of London). She is the Adjunct Curator at Griffin Art Projects, and is a contributor to the Asia Collections outside Asia: Questioning Artefacts, Cultures and Identities in the Museum (2020) publication edited by Iside Carbone and Helen Wang, to Alison Hulme (ed.) book, The Changing Landscape of China’s Consumerism(2014) and to John Jung’s book, Sweet and Sour: Life in Chinese Family Restaurant (2010). Her work is in museum and corporate collections such as the Irish Museum of Modern Art, Musée des beaux-arts de Montréal, Collection Hydro-Québec, Collection Royal Bank of Canada, Microsoft Art Collection, and in private collections in Canada, United States, and United Kingdom.

Karen Tam was the winner of the Prix Giverny Capital 2021 awarded by the Fondation Giverny pour l’art contemporain, and was a finalist for the
2017 Prix Louis-Comtois, a finalist for the 2016 Prix en art actuel from the Musée national des beaux-arts de Québec, and long-listed for the 2010 and 2016 Sobey Art Awards.