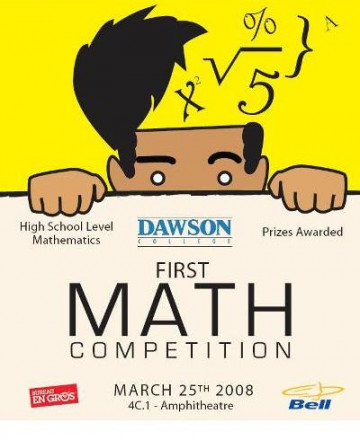 For years, people in different parts of the world have been competing with each other to show their skills, cleverness, talent and capability. In ancient Greece, competitors competed against each other with their physical powers, cunning and beauty. However, later competitions slowly became a means where competitors had to show their intellectual abilities also. In 1535 the famous contest in Italy, between two mathematicians Antonio Fiore and Niccolo Tartaglia resulted in the formula for the solutions of the cubic equation:

The purpose of Dawson’s math competition is to inspire bright students, improve and activate their mathematical capacity and awake their love and interest towards mathematics. The goal is also to find a way to generate creative thinking in our students. The problems in math competitions can be very inventive or tricky with short and sometimes unexpected solutions. However, the process of solving a difficult problem produces a whole world of creativity and inspiration.

“Who has tasted it once, can not forget it” Leopold Kronecker

Dawson’s first math competition was for Dawson students and contained high school level problems only. It took place on March 25, 2008. I hope that in the future we can expand it to cover more areas of mathematics.

It is obvious that every contest, whether in sports, music, science or elsewhere, requires an organized preparation of the contest and the competitors. A team of math teachers did everything to make this one happen: Kourosh Zarabi initiated the idea of Dawson math competition; Rodney Acteson took care of internal sponsors; Claudia Farnesi found external sponsors (Bell Canada, Bureau En Gros); Andreea Panait prepared the competitors, and George McArthur supervised three industrial design students in the creation of the poster; Laine Frajberg (external math competition coordinator), Richard Fournier, Bogdan Szczepara, Santhar Kengatharam and Olga Zlotchevskaia prepared and corrected the exams.

On April 2, 2008 the math competition awards ceremony was held. Robert Kavanagh, the Academic Dean, distributed the prizes to our winners: Teodora Nikolaeva Toteva, Matthew De Courcy-Ireland, Meredith Toivanen, Lidia Dinulescu, Ali Najamabadi and Evan Eames. The second math competition will be held on November 6, 2008. Hopefully there will be even more competitors in the next contest.