This poem is about a sex doll that someone built to mimic their wife who had died. It explores themes of grief and the role that technology could play in that grief. It talks about the superficiality surrounding this mimicry as well as the superficiality present in some relationship dynamics.

She hung the replica of “Persistence of Memory”

Her favorite painting by Salvador Dali

She said the ants were a symbol of mortality

The softness of sleep and the harshness of reality 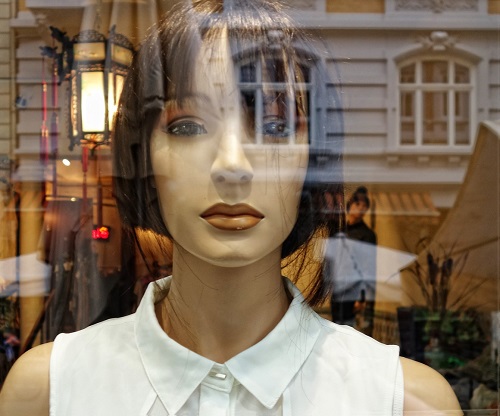 When she talked about art he adored her commentaries

But that night she had a few too many Virgin Marys

She went for a drive in their old Jeep Wrangler

He had a kaleidoscopic view of life

A twisting and twirling controllable device

So he custom built her made for his pleasure

Perfectly symmetrical from each and every measure

She woke and laid him down on their bed

And he kissed her lips that were a bit too red

She loved him as she was built to do

She caressed his hair as he commanded

Superficiality was the armor he demanded,

She slabbed on more and more cheap concealer

Masquerading as the deceased art dealer

The painting above their mantel drove her to a panic

To her, the ants seemed grossly organic

The hardest mechanical objects in front of her were wilting

And the lonely landscape around it, melting

She stared in a state of reflexive disorientation

The monstrous fleshy creature in her fixation

The machinery that seemed grotesquely primitive

And says to the man “It’s kind of derivative”

The basis of art is truth, and she was fake

He laughed in his bitterness and agony of heartbreak

The disparity between outward and inner disposition

Was enough to make them question the human condition

“I don't need to, but if you want I can chew, swallow and repeat.” As he brushed back her artificial hair

He noticed she was missing the scar she’d had there.

“You’re….. passionless” he stops and says to the plastic She wanted to cry but her tear ducts were just elastic Some form of grief to make her capable of sympathy

But was trapped by the trauma of existence haunting society

Her circuitry glitched, he won’t he won't he won’t

He never loved her, the one she was programmed to adore Automated shock waves ran through her entire corps

She leaps toward the door without making a peep

But her cheap cord was grabbed by the mournful creep

What he’d sown he’d reap, as tears started to seep He unplugged the cord and began to weep

And it was put to sleep.

Photograph, by txmx 2, distributed under a CC BY-NC-ND 2.0 license.