The Science of Cooking 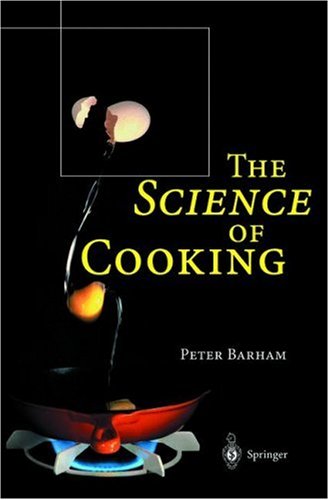 There seems to be a general consensus that cooking is a process guided by feel and intuition. It is said that "Cooking is an art". Indeed, when one hears the word "chef", what comes to mind is not an image of a meticulous and calculating figure, but rather one that is soft and passionate, and probably named Pierre or François. Peter Barham, professor of physics and molecular gastronomy, and author of the 2001 release, The Science of Cooking, would avidly disagree with this stereotype. To Peter, cooking is a realm of science guided by chemical reactions and strict rules.

Barham’s book is a guide into the domain of cookery through the eyes of physics and bio-chemistry. It reads like a freak cross-breed of a science textbook with a cookbook. Fortunately, you don't need a PhD in order to grasp the concepts. The scientific ideas are introduced slowly, allowing the readers to stay up-to-speed. Barham gives a brief background in physics and chemistry 101 by introducing atoms and molecules. Organic polymers such as proteins, carbohydrates, and fats are then presented, and everything from our sense of smell to how food is cooked is explained. The language gets progressively more complex as words like "thermal diffusion" and "protein coagulation" enter into the book’s lexicon. It all begins to sound quite technical, but because the introduction is so thorough, you won't find yourself holding on for dear life.

The fun begins as Barham applies “scienceness”, and right before your very eyes, cooking takes on a whole new meaning. The scientific formula for a perfectly cooked egg is provided and explained, the inner workings of microwaves are described, chemical reactions in meats are used to show how to cook a steak to perfection, different cooking gadgets are displayed, and just about every problem in food preparation is given a scientific solution.

The book begins to appear more like a standard cookbook as specific recipes, ingredients, and directions are described. To an outsider, the “cookbook” almost looks like any other until you notice that every page is riddled with fun-facts, problem-solving tips, experiments to try at home, and fancy scientific words.

For further reading, check out Shirley O. Corriher's Cookwise: The Hows and Whys of Successful Cooking.

Credits for the image in this article go to the illustrator of the cover of the book entitled "The Science of Cooking" by Peter Barham (2001).